6:00  About 200 men waiting outside in three long lines.  About 50 men and women wait at the closed humanitarian gate.  All five lanes inside are open and about 30 people wait on each of them.

We meet two female Norwegian volunteers in the plaza; they’d arrived at 5:00 AM and say that the crossing went pretty quickly.

The humanitarian gate opened right after we arrived and all 50 people who were waiting entered.  The gate stayed open; it wasn’t clear whether because of a problem with the lock or in order to ease the crossing.  During the course of 30 minutes, an additional 175 people went through the humanitarian crossing, including 30 women and 20 children.

also opened right when we arrived, and then every 5 minutes.  About 300 people went through the revolving gates in the course of half an hour, until the line completely disappeared.  Nor did there seem to be any congestion on the inspection lines inside.

6:20  People cross very quickly.  “Only” 60 men are now on line at the humanitarian gate, which hasn’t closed.  People continue crossing individually as soon as they get to the shed.

6:30  300 people went through the revolving gates and 220 through the humanitarian gate during the half hour we were at the checkpoint – 17-18 per minute.

During the same period, about 600 people went through the five inspection lanes (including people who were inside when we arrived).  On average (by a rough estimate), it took a quarter of a minute per person for the inspection

There was no line at all when we left, and about ten people waited inside at each inspection lane.

6:40  The vehicle checkpoint is crowded; you can’t see the end of the line.

We decided to go to the children’s plaza at Anata.  We took the shorter route, via Hizma checkpoint and Pisgat Ze’ev.  We got stuck in morning traffic on Route 60, when everyone is going south to Jerusalem (Israelis), or toward Jericho/Bethlehem (Palestinians) at the same time.

The trip, which would ordinarily take 15 minutes with no traffic, took us 50 minutes this time!

7:30  There’s a large plaza just past the Anata checkpoint ; school transportation for all the pupils from the neighborhood leaves from there.  The scene – of pupils streaming into the plaza and then onto their buses – is amazing.  Whenever we’re able to get there between 7:15-7:45, we hurry to the most rational part of the occupation (in relative terms).  Today we arrived right on time.

Some of the 3000 pupils who travel to school each morning from Anata have already left, but about 2000 are still wandering around the area, representatives of the neighborhood committee looking out for their safety, overseeing the flow of buses into the plaza, sending the children to the right buses – as well as making sure they behave.

The committee chairman, who’s there every morning and every afternoon, explained that they make sure the children aren’t rowdy, won’t fight with each other, and in particular that they don’t throw stones at police and military vehicles.

7:50  There are almost no more children in the plaza - 2-3 more buses and then even the latecomers will be on their way to get an education.  We spoke to the chairman of the committee who told us the new checkpoint has been under construction here for two years and is scheduled to open very soon.  He’s worried about problems, because people might have trouble getting used to the new, computerized checkpoint.  We asked him to call us ahead of time when he finds out when it will open, and we’ll try to come and help as much as we can.

Our interlocutor amazed us as we were about to part when he cited a Hebrew phrase whose meaning many young Israelis wouldn’t have known had they seen it on the university entrance exam:  “How long shall the wicked exult?” 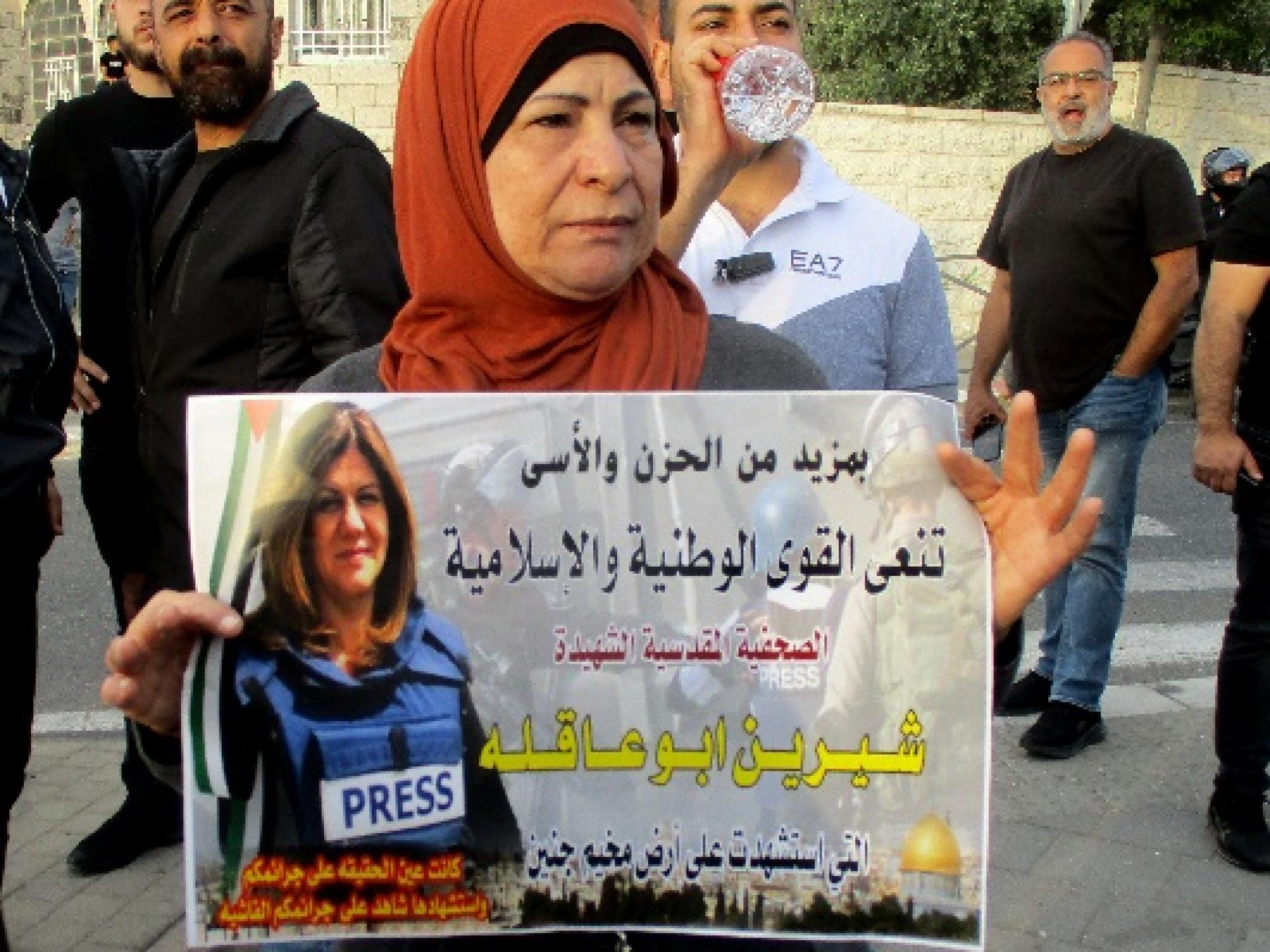 Protest over the killing of journalist Sheerin Abu-Aqla