The northern square: Air stuffed with gas and petrol fumes from the vehicles welcomed those coming from Palestine. At the middle- the remains of a sign directing the way, it stood there like a ornamental statue glorifying the site that is known as "The Terminal".

Chronicles of our journey to the DCO:

15:20- Three desperate young men were standing in front of the locked turnstile leading to the DCO. They had already tried to catch the attention of the soldier at the post: they pressed the intercom button (not knowing that it was disconnected) and called the number on the sign- but no one answered or noticed them. They kept trying for over an hour.

15:30- We called the DCO operation room and immediately got a response. They promised to find out what was going on.

15:39- The turnstiles opened. When we passed together with the Palestinians in front of the inspection post we found out what the delay was all about: The solider in charge of the magic button was laying down on two chairs, she rose up as though she was just waking up from a deep sleep, and kept gazing into the air with a tired look as she pressed the button.

We headed on with the young men to the DCO.

15:40- The last turnstile, the one leading to the offices, was locked. Time was running out. We called the operation room again. The men passed and disappeared in the building. We decided to wait for them outside.

16:15- While we were already dealing with a different incident, the men came to shake our hands and thank us. Two of them got what they came for. The third one will have to come back. Two out of three makes good statistics.

"The Cessation of Life Procedure" or "Collective Punishment"

At 16:00 the daily routine was violated by yelling, incomprehensible shouting that came from the loud speaker, the sound of metal clenching together and the stamping of military boots.

We hurried to the crowd. Shaul, the policeman, saw us and yelled: "Everybody out, get out, quick, don't take any photos, don't take photos, get out...". We cramped up with the mass of people being pushed by the police and the guards. Once they managed to get everyone to stand behind the fences and gates

, the checkpoint was locked.

Since we were locked outside we started gathering information about what had happened:

While a young woman's (20 years old) belongings were being inspected, suspicion was being raised. In the second inspection of her bag in the x-ray machine, a knife was found: "a penknife" said a Swiss photographer that managed to take a picture.

The security men that were alerted caught hold of her body and threw she on the ground with her face down, they hit her with bates, handcuffed her and took her away. People told us that they had heard her yelling: Allah hu Acbar!"

The young man that was with her had disappeared. The Swiss photographer asked about him, but it was as though the earth had swallowed him.

An ambulance arrived to the military base at the other side of the checkpoint.

"Kol Israel" radio said that one of the security guards was stabbed by a woman who had hidden another knife in her clothes, while he was performing a physical inspection on her.

None of those who had witnessed the actual event, foreigners or locals, had seen her, and we had only heard the yelling.

Television crews rushed over to find out what had happened. Even a Reuters man was there holding a gas mask, just in case.
In this "non story" situation, an old Palestinian man leaning on his cane with one hand and holding some nylon bags with the other, served them as the archetype of a wanted person. The man, being experienced in such occasions, played the part and required as to the channel and newspaper in which he could find his pictures.

The traffic at the vehicle checkpoint heading from the Occupied Territories had also been stopped. The first to be blocked was an ambulance. The second ambulance, the one from east Jerusalem, was already waiting on the other side of the checkpoint. Who was being taken to the hospital? Who was in need of urgent treatment? Who was running out of time and whose life was at stake? - We will never know. But who ever it was had to go on suffering for a long time.

- It was only after an hour and half that the vehicle checkpoint opened again, and the two ambulances met.

The Palestinians kept hoping that the checkpoint would soon reopen and so they stayed, waiting inside and around the man-cages.

The place was crammed as it always is at the end of a working day. Tens more arrived and were crowded at the passage.

About 200 people found themselves locked inside the shed. However:

"There is crack in everything, that how the light gets in" (Leonard Cohen)- The crack was soon to be found at the corner of the shed, the light coming from outside drew the people towards it. Tens of people hurried secretly to the other side, where uniform wearing men weren't there to order them around.  It was only after a large part of the crowd had vanished that the officers noticed it. At that point they place a guard to watch that loophole, in which those remaining had no interest.

From time to time someone needed to use the toilet, they went over to the BP officers and asked what should they do, they either received a rude response: "hold it in!"  or got no response at all (the toilets, as we and the Palestinians know, are always locked).

There was much obscurity regarding what was actually known. From our conversations with the soldiers and BP officers we found out that just like us, they too didn't really have all the facts, they couldn't really say what had happened, what was happening, what was about to happen or how long this situation would carry on.

In the mean while a rumor started spreading among the Palestinians that Qalqilyia checkpoint was once shut down for three days after a similar event.

At 18:00, two hours after it all began the commander received a new order.  An officer was sent to the center of the hall, he said that everyone should come over to him and hand him their IDs. The pile was handed then to the commander who checked the identity of those in the hall.

-We and the Palestinians that were there assumed they were looking for the man that got away two hours earlier.

A couple of minutes later the IDs were handed back to their owners.

In the mean while, new comers at the checkpoint were told to wait at the other side of the sterile zone, separated from those inside the hall.

At 18:15 the BP force left. People started to feel hopeful, but the checkpoint was still closed. A couple of minutes passed until the voice of a soldier came out of the loud speaker: the first life sign in two and a half hours. Everyone hurried to the man-size-cages. Only after some long and excruciating minutes the "clicking" of the turnstiles was heard, and they opened. People were let inside in groups of eight at a time.

On our way back we saw two long traffic jam on the opposite direction: one was heading to Qalandyia and it ended at the entrance to Ar-ram (about 2 km) and the other started at Jaba checkpoint and ended at Adam square. 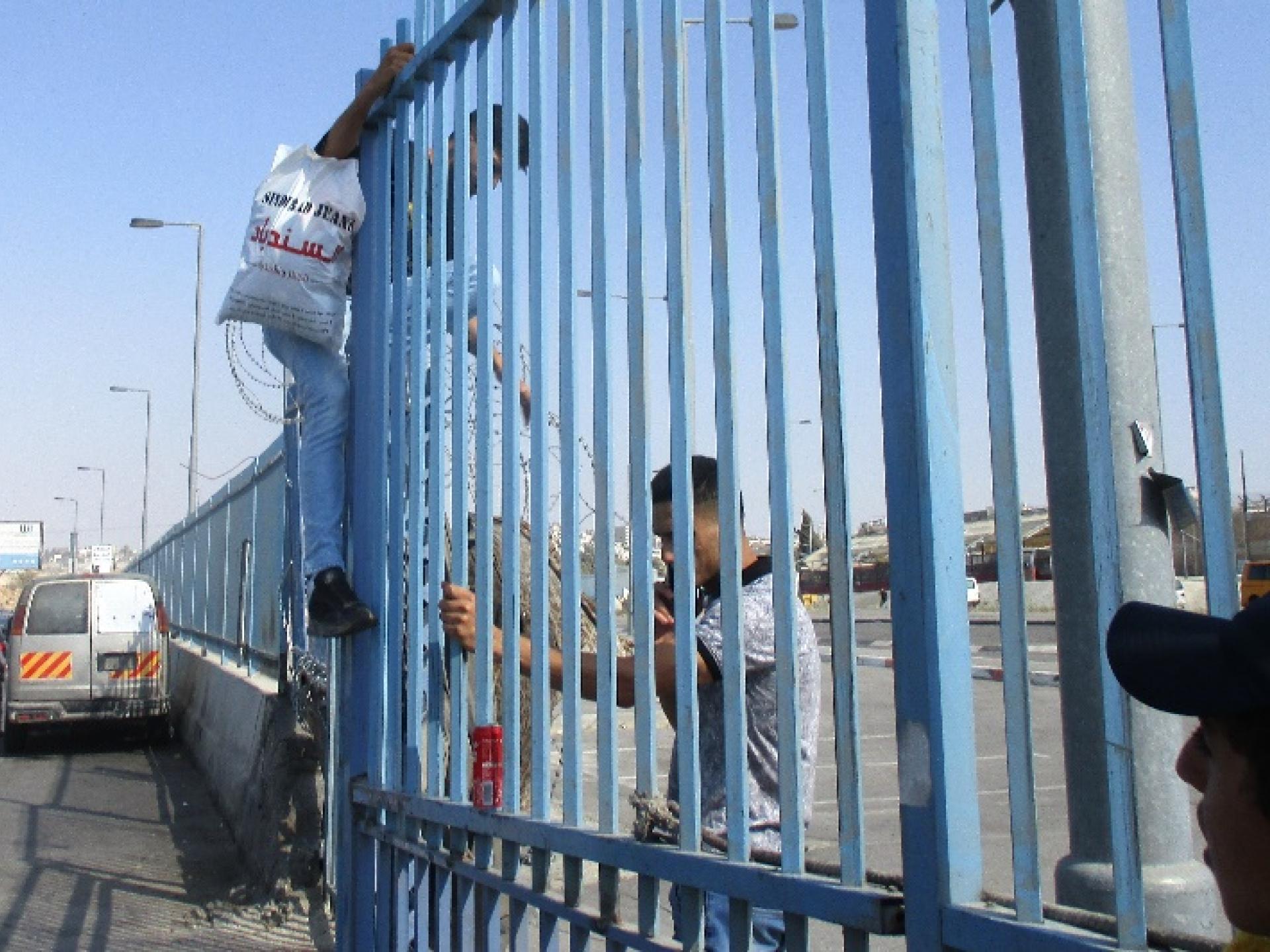