The Nakba Day at Qalandiya- a Snapshot

The smell is the first to attack the senses with a mixture of sting and sweetness that penetrates all the channels of the face.

Pillars of smoke and gas rose above the checkpoint, towards the wall and the roofs of the refugee camp houses.

The camps stood one in front of the other, as they used to do in ancient wars- each side had its weapons, symbols and uniforms to set them apart.

There were more military forces then one could count. There were soldiers from the unit with black uniform and by them were those with the green uniform. There were junior and senior officers as well as representatives from the high ranks.

Those who sit on roof tops were there as well- they took over the entrances to the houses on the main road of the refugee camp, invaded the homes and appropriated the windows on the top floors and the roofs from where they reconnoitered the area and aimed.

Soldiers from the hunting unit were also there, "Mista'arvim" in the military lingo. We saw them, with their faces covered, dragging their handcuffed prey into the checkpoint. An hour later, a Palestinian ambulance was sent for, one of the Palestinian detainees

was in need of help. We saw the teenagers being taken away, being dragged away, none of them was hurt or injured. We will never know what had been done to them in there. It might have been our presence beside the ambulance, waiting to see what had happened to the person during that hour, that deterred the officers from presenting him: "their taking care of him inside…", said the officer and sent the ambulance away. 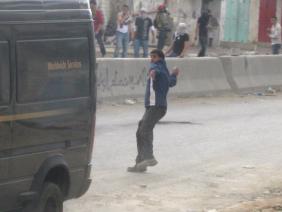 The army directed and made the rules. The commanding officers made sure that it wouldn't get out of hand and that there weren't any abnormalities that would seem disturbing to the foreign eye. The hundreds of gas and stun hand grenade salvos that were thrown at the teenagers who huddled at a distant spot, were meant to confine them to one place: "So that the event won't reach the checkpoint". The event didn’t reach it.

Regarding the ammunition they said: "none of it is live…"- they know as well as we do, that it too can kill.

They acted in accordance to the rules regarding the fire that is "not live" and also made sure to create the illusion of a fabric of life. A surreal situation occurred during those war-like hours, while the entire area was immersed with gas and smoke, vehicles kept driving the road to and from Ramallah, just across from the fighting sides.

This so-called normal scene was directed for the sake of the hundreds of media stations that were present. Representatives from television channels from Israel and around the world were there.

A journalist with a black cap, the voice of the settlers, clamed with much passion that: "a stone could kill…"

The evidence didn't correlate with his theory. During the whole time howling ambulances evacuated tens of young Palestinians that had suffered injuries from the gas grenades and rubber bullets. On the other hand: "our troops returned safe and sound…"

The approximately hundred meters between the two camps (the range in which the stone flew) became a no man's land, no one dared enter it and the entire strip was covered with remains of ammunition- empty bullet casings together with motionless stones.

In front of the uniforms was a group of ragged youngsters. Teenagers and young adults in shabby clothes. The Kaffiyah, their symbol coved their face, protecting them from the gas and from the cameras which are used so as to collect evidence for the man hunters who at night break down doors to homes.

They huddled at the far end, the western side of the road. They held their improvised weapons in their bare hands: mostly stones but some with slingshots- "David's Slingshot". With their youthful passion they tried harming Goliath, who stood across from them. They used bins as barricades and went on to set them and some tires on fire. The mixture of smoke from the tires and bins became a black cloud that rose above and created a barrier between them and the men in uniforms. The courageous broke through the smoke, hoping to better their position and improve their strike.

In the end, they were the weaker side. But it was their spirit and that of the Palestinians who stood next to us, watching with astonishment their courage and determination, that had the upper hand.

"This is the beginning of the Intifada…" said a young man. "If only!", replied his friend. A man older than those two who stood near them, he shook his head with doubt and said: "Who's going to fight this Intifada?- these kids?".