As usual, a soldier with a drawn weapon, a hitchhiker standing next to him.  We went through.  These days it’s raining and everything is still green.  We see black asphalt too, north of the new neighborhood in the Maskiyot settlement, and the frame of a new house.  Below, next to the road, we see a local kindergarten/school.  Burlap awnings and painted tires. 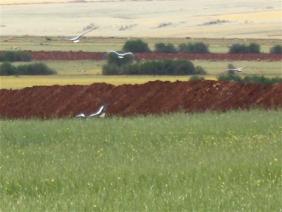 In the photo:They’ve finished (for now) increasing the height of the earthen berm west of the settlements of Ro’I and Beqa’ot.  It’s very high.  The barriers we photographed last week have also been widened and made higher.  Storks walk through the wheat fields between the berm and the road.

A tattered flag on the east side of the checkpoint, another to the west.

It’s cold and rainy.  A car which appeared to be going through is stopped and carefully inspected.  A taxi which dared advance before the soldier signaled is sent back, and only then is being signaled to come through.  A soldier in position with a drawn weapon.

The DCO jeep arrives.  We know the soldier; he asks how are we doing.  In response to our question, he tells us that the combat engineers unit is still manning the checkpoint.  “They’ve been in the army for a year and two months – the best there is…they’re awesome!  The problems arise with Kharuv and Kfir (battalions).”  We ask him why a truck loaded with sacks (flour?) isn’t allowed through.  Apparently the soldiers aren’t satisfied with the driver’s permits.

Meanwhile three men from Tamun, one of whom speaks Hebrew well, are explaining the delay to someone.  He is waiting for merchandise which is on the trucks (5.5 tons on one, 1.5 on the second).  One of the three has a valid crossing permit and is allowed to go through.  After he does so he’s called back (with the truck) to get his ID card.  We didn’t wait for them to cross, but understood that someone from the Beqa’ot settlement is waiting for the sacks, which are filled with za’atar (hyssop).  What will the settlement do with 7 tons of za’atar?  (That might even be something we’re not allowed to know).

A convoy of tour buses passes to the east (suitcases on their roofs).  The passengers seem to be having a good time – clapping, singing.

Pedestrians are allowed through the checkpoint only in groups of five (“Hamsa, hamsa”). 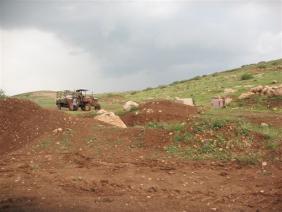 In the photo:A tractor waits by the locked gate.  The driver is one of Abu-Sakkar’s sons.  We spoke with him; he told us that soldiers had beaten him and his brother; about arrests and other harassment – whatever we were able to understand, given how much Arabic we knew.

We continued to Tayasir, but on the way discovered from talking to the man that the army didn’t come to open the gate.  We began nagging them on the phone.  The woman in Zaharan’s office who answered explained that it’s not her job to see the gate is opened; it’s the job of the soldiers (?).  After a number of calls she said it had been taken care of, she didn’t know details, but it had been taken care of.  The next day (Wednesday) we checked (with the help of someone who speaks fluent Arabic) and it turned out that it was opened, extremely late, not by the “usual” soldiers.

The soldiers aren’t in any hurry to let the waiting cars go through.  And then it seems “something occurs to them,” and they do so.  It results in long line of people having to wait for no reason.  One of the drivers shows us a notebook in which he records the time he waits at the checkpoints, quarter-hours, half-hours, in addition to hour-long waits.  We’re sorry not to have asked him to let us photograph the “treasure” in this notebook.

As usual, we see groups of soldiers training.