·       Children crossed the Shaked-Tura checkpoint after waiting for half an hour.

·       An incident at the Reihan-Barta'a checkpoint

At 06:50 everyone has crossed. The Bedouin children who live at the village beneath the checkpoint are waiting for a ride to school at Um-A-Reihan. 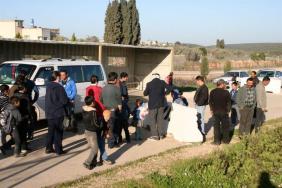 Young children are waiting with their fathers to cross on their way to school.  Yesterday they did not attend school because they were told they had to be checked in the inspection facility.  Today they are waiting again.  (See report from March 16th, 2011).  Today the soldiers are standing next to the shed outside the checkpoint, which is not their usual spot.  They return to the checkpoint but don't open the gate.  A., a representative from the Liaison and Coordination Administration, is also there and it appears they have not yet decided what to do. 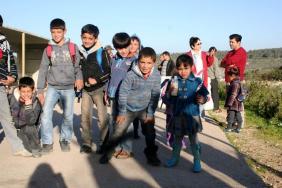 5 there are about 25 people waiting next to the turnstile on the Tura side, but no one has crossed yet. The first car comes up to be checked on the seamline zone side.  About 30 children are waiting and a commotion begins at 07:30 on the Tura side.  The soldiers are still waiting.  Finally the children enter the checkpoint, and as usual they line up to be checked and a soldier inspects their schoolbags.   After a few minutes all the children have crossed.  A few fathers are still standing on the other side talking about the problems that the checkpoint creates for them and for their children.  At 07:40 people also cross from the West Bank to the seamline zone.

At 07:50 a few people are still waiting by the turnstile, and the checkpoint returns to its usual routine.

At 08:10 we drove past the Reihan Checkpoint.  A few cars are parked, waiting to be checked.  Tenders loaded with merchandise are waiting on the other side. The gates

08:20 Dotan checkpoint
There is a line of six carscoming from Jenin. One car is checked at random.  Three buses with children are going towards Jenin.  It is wonderful weather for a school trip.  We also drove to Hermesh Checkpoint.  The gate on the road leading to Tulkaremwas open and unmanned.

On our way to the checkpoint, we received a phone call and were told that there were a lot of people waiting at the checkpoint and people were held up. The Palestinian parking lot was filled to capacity and there were about 200 angry people waiting. We learned that the terminal had been closed about 40 minutes agoand it was not clear when it would reopen. People thought that perhaps a closure

had been declared.  We were told that there was an incident in the terminal. There were also 10 pickup trucks with agricultural goods waiting to cross to the seamline zone.

At 09:15 a security officer announced that everyone was to go to the vehicle entrance gate. Immediately people congregated there and the people from the Liaison and Coordination Administration attempted to keep order.  Everyone was angry and in a hurry.  Some gave up and returned to the lower gate to the terminal where they thought they would get in faster.  One woman was waiting with the men and was allowed to go in, and a dozen men were also allowed in with her.

At 09:40the gate to the terminal opened. The woman in the booth instructed people to enter five at a time.

By 10:00 everyonehad entered the terminal.  We saw that people were already ascending the sleeve

towards the seamline zone, but we didn't know when everyone went through.

We left the checkpoint and returned through Barta'a. Despite the fact that a lot of workers did not arrive, the marketplace was busy.  In the evening a man phoned Ruthi and reported that there was still trouble at the terminal.  He had to wait about 20 minutes to get into the terminal and it took about 40 minutes to get through.