We turned off to Tapuach junction to meet two people refused entry to Israel, and from there to the Jordan Valley checkpoints.

Sparse traffic in both directions.

A few cars cross without delays.  We meet two people who are refused entry to Israel and have them sign forms.

13:00  We turn toward Ma’aleh Efraim.  Everywhere around us is gloriously green. 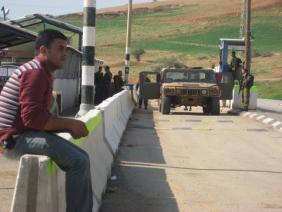 A military vehicle and about ten soldiers.  A Palestinian truck driver waits for merchandise coming from Israel.  Some of the soldiers get into the vehicle and leave, four remain at the checkpoint.  A few vehicles go through the checkpoint; one woman is inspected.

A car stops near us with residents of the Bedouin village of Izbidet who came to the area from Beersheba in 1967.  They have a permit to go through the checkpoint in a vehicle.  Those 40 or older receive permits to work in Israel.  Some work in settlements doing agricultural jobs.

14:00  We get on Route 578 (Alon Road) going north.  Along the road on our left is a long ditch that prevents herds and people from crossing to the area with vegetation.  Concrete barriers along the road with signs, “Firing range,” only a few meters from the Bedouin encampments.  We wonder how living areas turn into a “firing range”…

We continue north toward Maskiyot (a settlement in the northern Jordan Valley with a military preparatory institution), visit Fathi’s family – he’s out with the flocks – and promise to return later.

15:30  We return to Fathi’s encampment.  He tells us:  Two days ago youths from Maskiyot chased the Bedouins, who live in the area, from the spring.  Fathi told them that the spring comes from God…so everyone can benefit from it.  The guard from Maskiyot doesn’t allow the Bedouins to graze their herds in the pastures and youths from the settlement frequently harass them.  He points to a hill opposite us and says there’s good pasture on the other side but they don’t let him go there.  They complained to the army and to the police, who did nothing.  All they ask is to continue living peacefully, and to be told where they’re allowed to graze so they’re not subject to the whims of youths from Maskiyot.