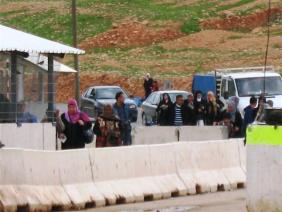 A blue and red flag flies over the unmanned position eastern roadside, with a logo and inscription, “Taoz battalion” and “zero attacks from the crossings.”  We relaxed.  The dog pen and water tank are enclosed behind iron bars.

Lots of activity, both people and traffic.  People crossing to the west, on foot or by vehicles, aren’t inspected.  A long line going east, cars and people on foot.  Taxi drivers tell us everything is painfully slow, inspections rigorous.  The soldiers know them because they cross several times a day but don’t make it easier for them, which affects their livelihood.  People on foot, holding belts in their hands, hurry to the cars.

Nine male and female soldiers walk on the road, talking; from time to time they let a car through.

A van crosses on its way to one of the Bedouin localities.  One of the passengers tells us that his son, 17, with a “Jordan Valley resident” permit (which entitles him to go through the checkpoint) wasn’t permitted through.  He was sent back – where?  They’ve lost contact with him.  The father said that it will be OK, he’ll probably cross later.  Unfortunately, we didn’t get a phone number to follow up.

15:30  A bus crossed westward, without inspection.  People working in the field south of the checkpoint.  A car drives through that field and stops next to the workers.  We hear over the walkie-talkies that the car seems to worry the soldiers.  Two stand with drawn weapons, perhaps observing through the gunsights.  A few minutes later an army jeep from the checkpoint reaches the workers in the field, and leaves a few minutes later.  15:45  Many waiting to go east.  A young man sits on the checkpoint fence for more than 20 minutes (right in Area A).  He’s Israeli, his wife’s family lives in the Jordan Valley and they came to visit them.  The soldiers told him to wait until the family comes to get him.  When he went to visit his uncle in Tubas he didn’t know he wasn’t allowed to cross through the Hamra checkpoint. 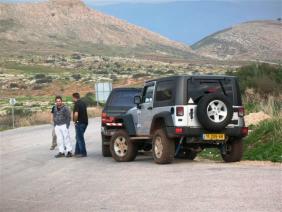 Four cars wait to cross westward.  They say they’ve been waiting a long time.  A taxi driver says he waits about 20 minutes in the line of cars and then about half an hour for all his passengers to go through.  Ten cars on line from the other side.  We decided not to stand where we usually do (which leads to arguments with the soldiers) in order not to give them an excuse to close the checkpoint while so many people are waiting.  We don’t understand why the waiting cars are parked in a group instead of being called through one by one, as usual.  It turned out they were ten Israeli 4x4’s (“Rubicon”).  Touring Area A?  Only after they all crossed did the checkpoint open for the Palestinians, who waited longer and longer. 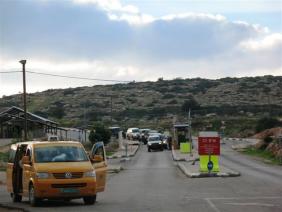 The checkpoint commander (already a veteran here) comes over to ask if everything’s ok, explains that because the jeep drivers are “civilians” (and not “Palestinians”), their crossing was arranged with the Israeli police.  The jeep drivers were angry at the delay, didn’t know they weren’t allowed to cross through this checkpoint, threatened (joking, of course) not to do any more reserve duty, wondered what we were doing and asked why we wrote down numbers, and where we’ll broadcast.  Their driver’s licenses were returned pretty quickly and they left.

“Where are you coming from?”

A skeptical glance: “Have a good trip.”