No traffic, that is the reality on the roads surrounding Qalandiya checkpoint ever since they had been narrowed down.
Thousands of vehicles were lined up on the main road to and from Ramallah, the end of this jam was not to be seen.
No one takes notice of their complaints; the deafening orchestra of honking was an outlet for their anger.

- Ahmed Abu-Leish works for his living for Palestinian bus companies. He arrives at work for his 12 hour shift at sunrise and leaves after the sunsets; he monitors the traffic to the new checkpoint ward by lifting and lowering the iron chain. He earns 50 Shekels a day. Ahmed himself is forbidden from passing to the other side of the checkpoint. When requesting a permit he receives a negative reply, after all, he had spent three of his twenty five years alive, in prison: "when I was a child, I used to throw stones…"

Ahmed, during the first days of the El-Quds Intifada, just like his young siblings today, protested against the checkpoints and the soldiers. Ibrahim, his cousin, was caught by the army's camera

shaking a separation bar on the road, he was arrested and charged with "attempting to tamper with military equipment", an accusation that in time had been changed to "weapon trade". He had been at Ofer prison for the past several months.
Ahmed said his wife dreamed of going to Tel-Aviv, "I tell her: only once there's peace…", wishful thinking which resembles that of the people who believe in Messiah's Era.

At the beginning of our conversation Ahmed pointed out a portrait of Yaser Arafat that had been drawn on the wall. He told us that this painting as well as the one of Maruan Barguty which is near by, had been drawn by him and a friend of his. 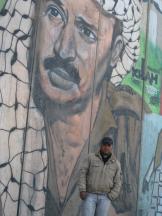 He added that at Ramallah there is a mosaic on a wall which he had created.

-    We had a meeting with a friend from the Gaza strip. As darkness was falling and the chill of the evening grew, we created for ourselves a pleasant niche; we sat on the remains of the mettle benches, drank hot coffee and conversed about privet and public matters.
The friend, who is in charge of the public health administration at the Gaza Strip (an organization     affiliated to the UN), told us about the reality of life at Gaza, about the unemployment rates which had been rising lately, about the passage at Erez checkpoint which at times takes hours, during which the person is isolated, getting orders from voices that come out of the load speakers, sometimes they order him to undress leaving only in his underwear on.   He told us that the orders at the lane are usually given in Hebrew, but sometimes they use Arabic, "they say: "Yalla…". The most saddening story he told was about the insufficient food that many children receive, children from poor families that at their kindergartens and schools get one meal a day from UNRWA, which is not enough "not for living and not for dyeing".