On our way from Hars to Kifl Hars we again saw the rubble from the house in Area C on the main street, between other houses that remain standing.  It was demolished right after construction had been completed.  According to what we’d been told in the past, the reason this house in particular had been demolished was that its owner hadn’t managed to file suit in court after receiving the demolition order, while the others responded to the orders in time and their cases are under consideration.

At Kifl Hars we stopped at a small cemetery containing a small structure (in Moslem style) known as the tomb of Caleb Ben Yefuneh.  Talking to someone who lives nearby (we have his name), a history teacher who owns a grocery store near the tomb, we learned this is a holy place for Palestinians, who consider Caleb Ben Yefuneh to be a prophet.  The area military commander and the army rabbinate has posted a sign declaring the site to be a holy place.  There’s also a space set aside as an “ezrat nashim” (for women 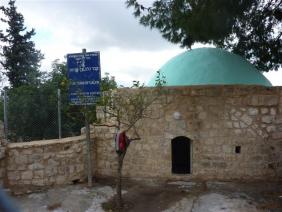 Up until three months ago the inhabitants of the village suffered from noise and harassment by ultra-orthodox settlers who’d come here at night to pray and celebrate, and even desecrated nearby tombs.  Recently the Palestinians and the army reached an agreement: the army will insure that the worshipping settlers behave quietly and respectfully, and also allow one Palestinian transport company all-day access through the gate to Salfit, next to the Ariel road.  He said that he has no problem cultivating his lands near Ariel.

We met the owner of the clothing store in Kifl Hars, whom we’ve known for a long time.  We spoke with him again about the very low wages received by Palestinians working in the settlements and in the industrial areas.  The workers are afraid to complain, so they won’t lose even the small amount they earn there.  In response to our question, he said that there was no after-school program for the children, and that since the checkpoints were dismantled and travel restrictions eased, villagers are more likely to shop in the larger towns rather than in the local stores.

In Qira we visited B., a young, enthusiastic woman who teaches English to six classes in the village school.  Her English is good.  She studied in the Salfit branch of Al-Quds’ open university.  In response to our questions, she said that a teaching load is 25 hours/week.  Most of the village children are in school, boys and girls in the same classes, in separate rows.  There are close to 40 children in a class.  It’s not easy for teachers to handle the older pupils, though she says the boys are fairly well-behaved.

Sometimes there are also children in class with special needs, and the staff tries to meet them.  The Ministry of Education has a regional center in Kifl Hars.  The official test results of schools in the area are kept there 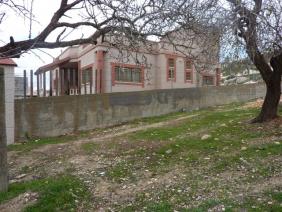 We’d made an appointment in Einabus to meet M. (who speaks Hebrew), who’s A.’s son – the family living up from the second-hand store.  The father’s not in the village today because he’d been arrested for not appearing in court.  Before we arrived the son informed us he couldn’t wait because he had to go bring his father home.  We met his mother and cousin, P., instead.  The father still hadn’t been released by the time we left in the afternoon 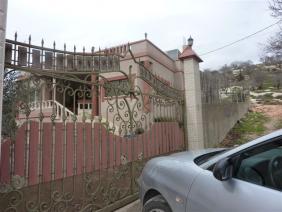 The unfortunate case of a family member came up again.  She’s married to a young man sentenced to 11 years in jail, and has been imprisoned in Beersheba for almost five years.  She’s only been allowed to visit him twice.  A few months ago we contacted the Red Cross on her behalf, but although she contacts them at the beginning of each month, nothing’s happened so far.

From there we went to meet Bassam Falah Bedawwi, whose new car had been set afire in his courtyard at night by settlers “exacting a price.”  B’tselem and Yesh Din had already been to see him, took his testimony, photographed the car and what remained of what had been written on the wall around the lovely home after the army tried to conceal it.  We were told that there’s no chance that Israel will compensate him for the damage, unless the arsonists are caught.  He said that on the basis of what was written on the wall, the settlers who carried out the arson came from the Ein Aleh (?) outpost.