With ambiguity and obscurity, that had become part of the Palestinians' day to day life, the sovereign rules.

The start of a collective punishment is always known. The end is never clear. With ambiguity and obscurity, that had become part of the Palestinians' day to day life, the sovereign rules.

The passage was closed for about ten minutes. While we waited among the entrapped between the turnstiles, we managed to talk with two residents from the village Ktana, who are employed at the factory "Of Yerushlaim" and that were in a hurry to arrive at Atarot industrial site. We also spoke to a student that was worried he wouldn't arrive on time for his test, but there were many others whose story we couldn't hear.

Everyone knew that we were the reason for this punishment. We were surprised when no one expressed their anger or resent towards us, but greeted us with certain cheerfulness for meeting someone that speaks aloud about what troubles them, they told us stories from their personal experiences from the checkpoint.

The question: "why won't you open the passage before these good people?", which was directed at the soldier in charge of pressing the most important of the checkpoint buttons (the one which locks and opens it), wasn't appreciated, and after ridiculing the phrase "fine people", the soldier bestowed upon us his generosity. 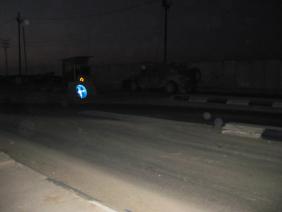 "It's a breathing checkpoint!", we learned a new phrase which means: a checkpoint that the Palestinians pass through without many difficulties.

It was dark when we arrived: the place looked like the ghost of a deserted checkpoint, and only the shadows of the soldiers at the post indicated that not only was the checkpoint breathing, but that is was alive and well…

We were told that the fuel tanks had run out, that they were fixing the problem and that the checkpoint would be light again in a few minutes.