When we arrived at 6:35, all the workers were already waiting for buses on the Israeli side. On the Palestinian side the stall owners told us that representatives from the Liaison and Coordination Administration arrived on Friday and have asked them to arrange a business license in order to run their stalls. They are currently in negotiations with them. One bus of prisoners' families is waiting at the checkpoint and another plus minibus pass us on our way to Hebron. On the way back, we passed through the checkpoint and met an injured Palestinian worker whose employer had brought him back from Ashkelon. His leg was in a cast and he was walking on crutches, trying to get back to his home in Dahariya. He told us that his employer gave him papers so that he could submit a claim to the National Insurance regarding the accident. We referred him to "Kav La-Oved" (Worker's Hotline). The cases in which Israeli employers take advantage of Palestinian workers who are injured or lose their ability to work are unknown to the public, and should be investigated and publicized.

There are signposts at the crossroads at Teneh Omarim, Eshkolot, Shama, Atniel, and Beit Hagai saying, "If you want a house with a green roof, peace and quiet – see the Hebron Hills Regional Council movement Amnah. It's time to go back to the roots ...." Or something of the kind. There is no mention of the fact that these places are settlements on confiscated Palestinian land and make a mockery of the two-state solution. There is little traffic on the road including military vehicles.

The Sheep Junction: a temporary checkpoint is set up. We stop to talk to the reservists manning the roadblock, and they say that it is unnecessary. Checks are done only randomly. One of the soldiers shows me a man's ID card that says he is a teacher, and explains that he let him go.  Why is it necessary to harass people in the midst of Palestinian territory where there is only a little traffic going to Hebron?

On our way back we see a convoy of military jeeps going up the hill towards the new pillbox built above Deir Raza.  There is still heavy equipment there. We have "conquered" yet another hill and turned it into a military base. Today we didn't see the balloon floating in the air above the hill.
The settlement on Antenna Hill overlooking Kiryat Arba is still expanding.

Palestinian farmers have plowed their small plots beneath the settlement of Givat Avot near the Hazon David  Synagogue - this is (yet another) illegal outpost on Palestinian land that has not yet been dismanteled and removed. The Pharmacy Checkpoint: Soldiers from the Lavi Battalion are manning the checkpoint and checking every child, making them show ID cards or birth certificates, particularly boys aged 12-13. A peace activist there reports that there have been instances of harassment and humiliation. We talked to the soldiers until their commanders arrived, and they said that they are ordered to check border points, claiming this is that. "And don't argue about politics and tell me that this only increases hatred" one of them retorted. Even Ibrahim, the caretaker at the boys' school, says these soldiers really examine the birth certificates, and adds that any child who comes without a birth certificate is sent back home, even though they pass through there every day on their way to school. Ibrahim, the pita salesman, also complains about the three soldiers manning the checkpoint this morning. Their commander, a sergeant, arrives and forbids the other two to talk to us, and we recognize the syndrome of a lowly commander designating inflated authority. It seems that these orders are not a policy dictated from above. M, our driver, suggests talking with the upper echelons of the army and telling them about the conduct of the soldiers at the checkpoint. Ibrahim is discouraged and says "These are new troops." What a heartache.

Tel Romeida: Next to the checkpoint almost at the heart of the Arab neighborhood, there is a signpost on the road, directing to the Jewish cemetery and the Yishai neighborhood. Needless to say, Palestinian cars are not allowed to go there. The sign is evidence that only Jews are allowed to be here. No one else is delayed at the checkpoints.

We return by way of the worshipers' route. A child who left school tells us that the soldiers still enter his house occasionally (he is the son of Osma). There is nothing new in Hebron.

The journey through occupied territory ends. 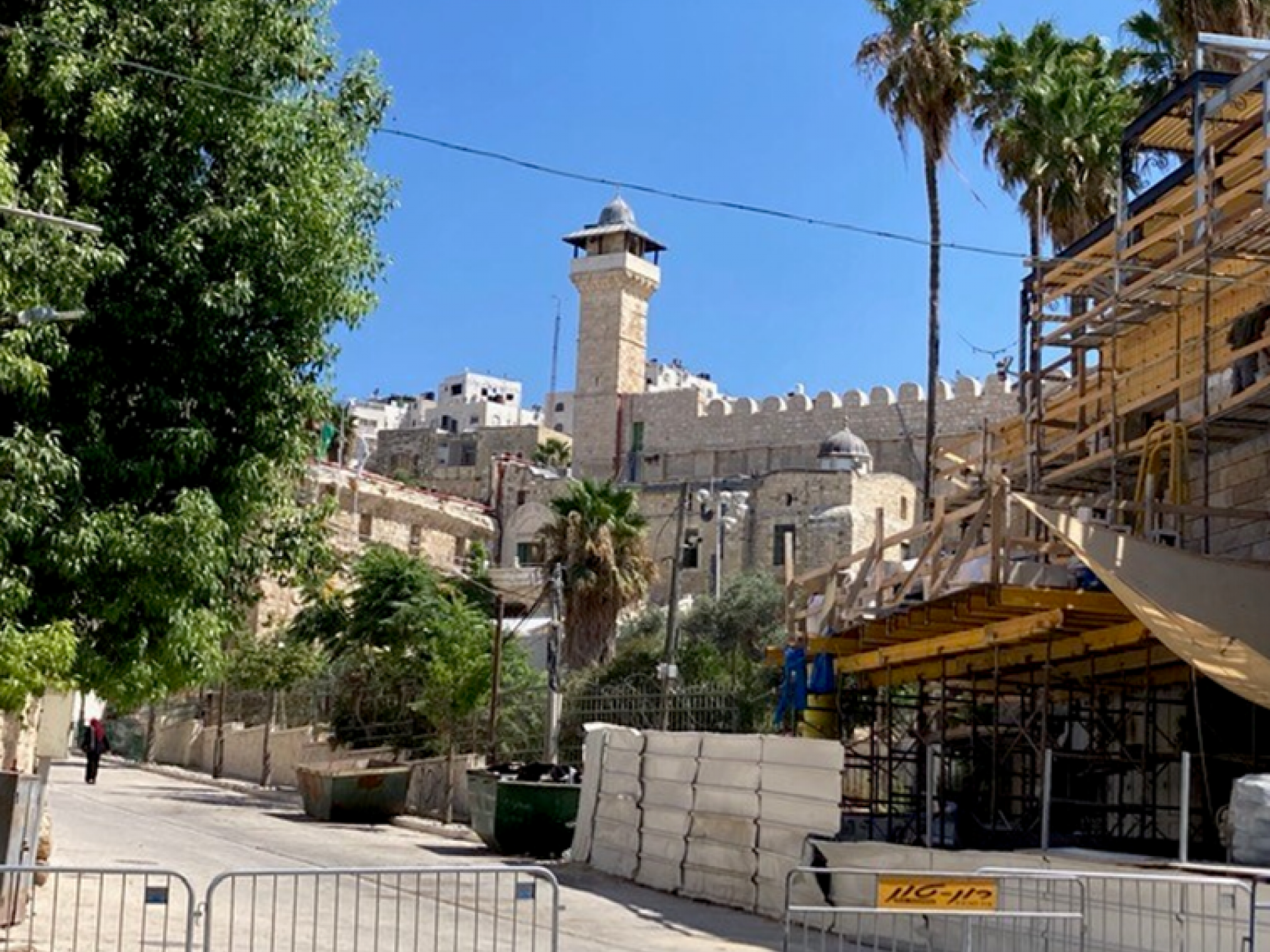 Hebron, Cave of the Patriarchs 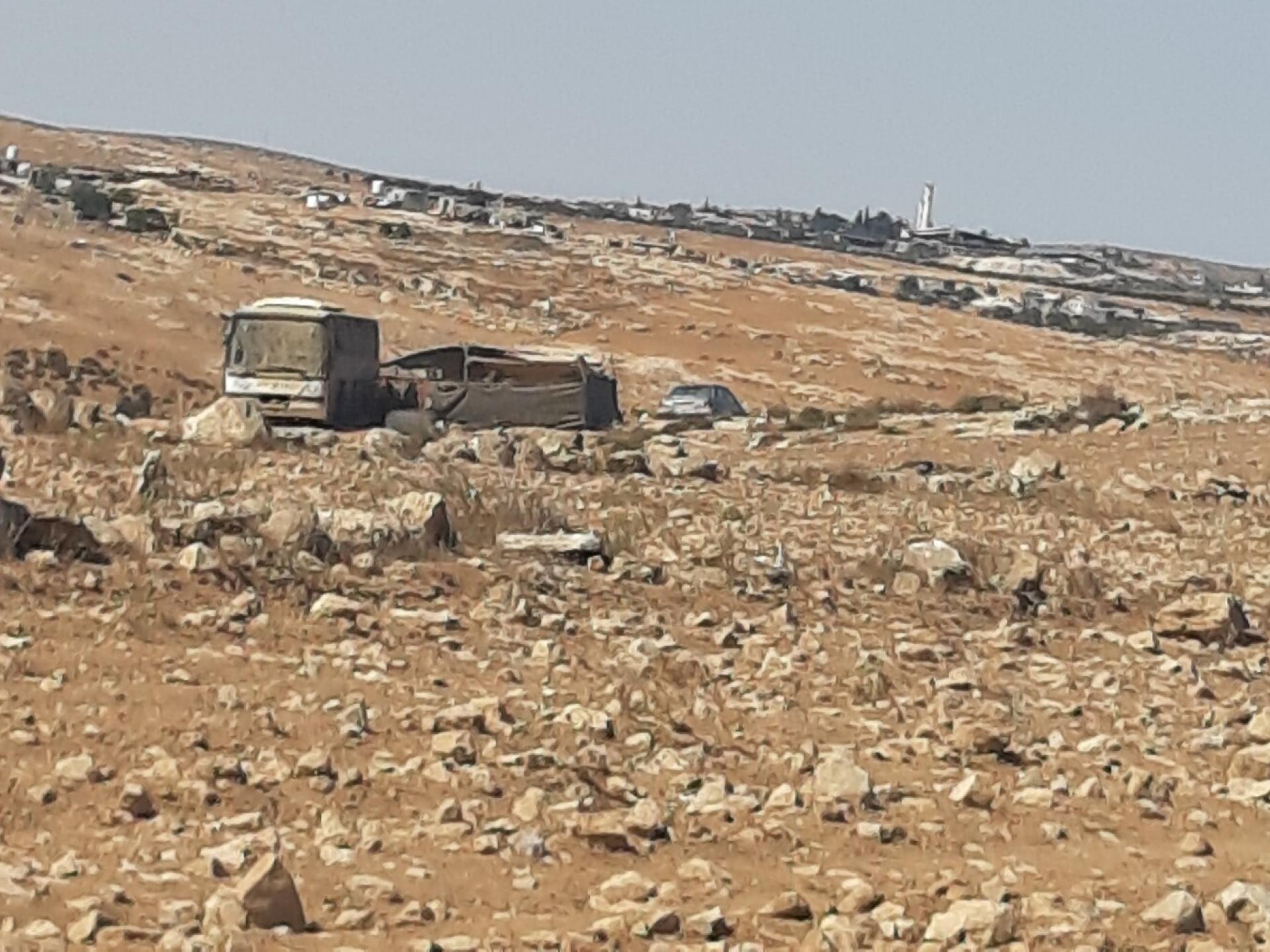