1200 – Hamra barrier – sparse traffic, vehicles pass the barrier quickly. The Palestinian passengers, as usual, have to pass the barrier on foot. The men emerge, mumbling  "when you are here, it is much better, else they would ask us to raise the trouser legs or remove some clothing".

A number of youths from genin are wondering where we are from. "Israel´we reply. "No, but where are you from?" "from Tel Aviv". "No, which country are you from?" when we explain that we are Jewish women from Tel Aviv and what we are doing, everyone leaves the taxi and gathers around us, with much appreciation and no less – curiosity..

We stop at Ein Hilwa to view the new school which has been rebuilt today after being destroyed in the recent storm (the school is merely a large white tent). It is situated between 4 beduin encampments, close to a turn in the road leading to Tayasir barrier. The workers building the school reported that earlier that day settlers from Maskiot arrived, wandered around the school and took pictures of the school and the workers, and the  atmosphere was threatening.

While we were talking two settlers descended from Maskiot  to a well situated between the school and the Palestinian tents (first photo below). We approached and found two 18 year old boys from Afula and the Alon settlement near Jerusalem, sitting by the well (a small collection of turbid water), and informing us that they came to have fun and if we hadn't come they would have entered the water. Then they said the water was filthy because the Palestinians are watering their cattle there. No, they are not harassing the the Palestinians, in fact they are leftists, however this is Israel, and we were here first, and they should go to Palestine, since they have no right to be here.

A woman aged around 50 reaches the well with 3 cows, and indicates that she wishes to talk with me. She reports that the younger of the boys (from Alon) threw stones at her, some of which hit her 10 tear old son. She asked me to tell to him not to it again. I didn't expect much from this conversation but she insisted. I hoped that if I, an adult Jewish woman, talks to him, he will abandon his violent ways. Initially he claimed that he had never seen the woman before but then he said "she started the row by cursing me" and was angry that she had "told on him".  I am concerned that he will harass her again.

During our presence another woman arrived with a donkey and water containers, which she filled from the filthy well. She said the water was meant for her sheep and for laundry and dishwashing. She said helplessly "there is no water" and therefore she used water from this well. We tried to indicate to the youths the significance of water for the Palestinians who have no alternative source but it seems that they were not impressed. 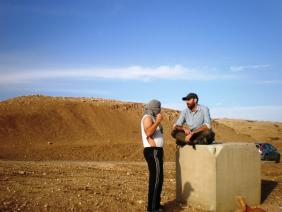 We went to celebrate the 89th birthday of our friend Anina near the Tayasir barrier, and when we returned to Ein Hilwa we saw 6 settlers coming from Maskiot towards the well. One of them approached us, a big man, his shirt wound around his head and hiding his face. He didn't wear a shirt, only a small prayer shawl on his chest. His comrades tried to calm him down. He threatened to beat me and the journalist, and cursed him. The journalist tried to reason with him but the response was derision and threats. His companions stood nearby and supported him but they were uncomfortable with his curses and threats. We noted that there was no Palestinian to be seen – apparently they saw the ruffians desceding the hill and fled. There is no doubt that had we been Palestinians the thug would use violence against us. We too were scared and left the area.

The Palestinians told us that the settlers arrive daily when they bring their flocks to the water after pasture, in order to violently prevent the sheep from drinking.