11:20  Bezeq checkpoint – We crossed.  A line of trucks standing in the left-hand lane; we can smell the strong odors of cauliflower, cabbage and onion from the fields.

11:30  al Farisiya  (a small Bedouin village north of the road up from the junction of the settlement of Mehola).  We met Yesh Din` staff, who met with the Bedouin area leader.  We met six young Palestinian women in the tent for guests who’d come to conduct a family survey (perhaps under the auspices of UNRWA).  Outside we saw sacks of flour, bottles of oil and other unopened sacks that had been brought here.

12:10  The way to Hamra checkpoint (on the Alon Road)
Surfacing the road with asphalt continues.  They’re now working north of the army camp.  The earthen embankment to the south is very high.

12:25  Hamra checkpoint
A pair of female soldiers at the position on the road, and a second pair sits/stands admitting people on foot.  They ignore us.  It’s quiet.  Light traffic.  Few pedestrians.  Red Cross and Red Crescent vehicles cross toward Tubas.  A car with a red license plate (belonging to the Palestinian Authority) brought workers of the National Road Company from Jericho.  Another car had a surprising sign:  “Mehadrin-Tunport” (a fruit marketing company).  Before leaving we met four boys and six girls coming from school located toward Furush Beit Dajan.  They walked through the checkpoint on the road and turned north to the adjacent encampment. 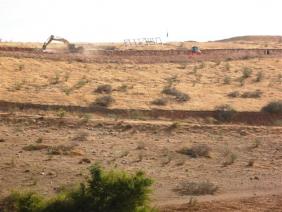 on the way to the Tayasir checkpoint.  5-10 minute wait:  Stop/Go.  A nargila beside the guard.  A garbage truck “in army service,” an army water tanker.  Work has been renewed on the road below the new buildings at the settlement of Masqiyyot.  Infrastructure work is obvious – two tractors, boulders.

13:25  Tayasir checkpoint
The huge bulldozers are gone.  A long line of cars east of the checkpoint.  The checkpoint commander (a sergeant):  “Need help?”  No.  After a while he inquires what we want in this isolated location.  Our explanation seems strange to him.  He doesn’t understand.  Listens.  Asks questions, wonders.  We suggested he look at the website.  Pupils drove through today also, instead of crossing on foot.

Heavy traffic, and long lines formed.  We were told there’s an explicit order not to open the crossing in both directions simultaneously.  And in fact today cars were inspected very carefully and slowly, documents and contents.  Passengers said that it’s always like that recently.  Physicians in a car belonging to some medical organizations said it was inappropriate for people like them to be forced to go through the revolving gate on foot.

Before leaving we met Aalan Daragama from Tayasir (he speaks very good Hebrew), who was waiting for someone with two children.  Pointed to the hills north of the road (toward the firing range) and explained to his children.  He knows Dafna very well and sent regards.  Said that after his son had been hit at the checkpoint, Dafna brought a journalist, the story was published and had even been posted at the checkpoint.  He’s a Bedouin, born in 1969.  His family owns 90 dunums (registered in the Tabu) to the north of the road; part of it is planted with olive trees.  In March, 1979 (which was very rainy), after the base had been built at Hemdat, during exercises when tank shells had been fired toward the hills, his father and brother were seriously wounded.  Later they left the area and purchased land in Tayasir.  In the past they’d received one or two days’ permission to harvest their olives.