"Come look, a leftist…", a soldier hollered to her colleague, as Roni, a rare bird which is in extinction, revealed herself before her eyes.

The children of Qalandiya are no longer begging us for money, but only ask that their picture be taken. Next time they meet us, they will each receive a copy of their own photo- a souvenir (perhaps the only one) for their childhood album.

Jaba checkpoint is once again functioning only on the road leading west; Those driving on it are the only ones to be halted and inspected to make sure there isn't a Jewish passenger amongst them, in which event he wouldn't be permitted to continue for fear he might be attacked by a resident from Qalandiya.

"Blessed are you, who did not make me a gentile"- so was written (by a Jew) on the side of the wall which faces the settlements Adam and Ofra, and also Kfar Jaba.

A lit Chanukkia made out of bullet casings was placed on the window of the high tower at Atara checkpoint.
Two of the soldiers in side came down to talk to us: "this isn't a checkpoint"¸said one of them, "it's a military base…"
"No", said the other, "it's a post…"
They talked a lot in favor of the checkpoint, especially the one who lives in Gush-Etzyon. He said he knew his "Arab" neighbors better than we did, he speaks to them and employs them: "They like us very much and know that their problem is with the Palestinian Authority". He also told us about the way the checkpoint benefits the Palestinians who use it: "There was an accident over here on Saturday and we provided them with medical help…"

For the first time at Hizme checkpoint, or at any other checkpoint for that matter, while passing from Palestine to Greater Jerusalem, we had noticed the presence of a police unit of dog trainer.

The following text was written by our guest Liat, who came with us on our shift: 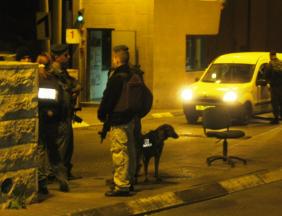 Like a tourist I roam the country, an ambiguous term in itself.
Make quick trips to the West Bank, trying, with little success, to put together the layout of the districts in my head.
Like a tourist I roam the country and yesterday I arrived at a checkpoint.
But once I managed see it, the country turned into a land filled with checkpoints- some more horrible and some less than the first monster I had seen at Qalandiya.

I had never arrived at that place with the air-conditioned bus which I had paid for, or which had been funded by the Ministry of Tourism. And certainly not with the one funded by the Ministry of Education.
This time I came by foot, wrapped up, without fear and it was cold.
Ronni was the first to enter.
"Are you an Israeli?", "Aren't you afraid to be there?" (On the other side of the checkpoint she meant), and Ronni answered that she wasn't.
"Are you a leftist?" she added before joyfully telling her friend: "come look at the leftists". I approached the see-through wall after her, "Are you also a leftist?" (Perhaps she meant an Israeli), she asked, I answered that I was. "May I take a picture of you?" she continued. "You may, only if I may take a picture of you", I answered.
She focused on the badge that Tamar had given me earlier and asked: "against the checkpoints?", "could you give me one reason why checkpoints are bad?" suddenly her friend in the booth found an interest, they both were eager to hear my answer and the  spark in their eyes indicated that they wanted an answer that would convince them. The five of us, at that moment, had the leisure to stand there while just behind us was a long line of people.

I couldn't think of one reason, not pain, not fear, not chill, not helplessness, not difficulty, none of those had occurred to me. I just wanted to get out of the line, which wasn't an actual problem for me since she didn't even really check my ID. While we chatted away about the necessity of the checkpoints, a Palestinian student who was in line after me had her book wedged in the conveyor belt. It was wedged deep inside and in order to get it out the soldier had to move the belt to the opposite direction. Most of the book was ruined, I'm sure that won't affect the way she reads the text.