Four hours, forty minutes and three Jewish women- that's all it took to help a father pass Qalandiya checkpoint so he could identify the body of his deceased son

- How to write of the death of a young man whose name we don't know because during the whole while we were with his father and uncle, not once was the name mentioned? -  "Ibni" mumbled the father.

- How to relate about a father who had waited for hours, patiently and silently, with only soft sobs escaping his lips, and with his brother to speak on his behalf- for he was lost for words?

- How to describe his hunched down appearance, his facial expressions which reflected uncertainty whether he fully grasped that his son, who the police had told him over the phone was: "badly injured...", was no longer among the living?
- After all perhaps was still some hope that he had yet to take his last breath, as the formal words hadn't actually been said?

- How to write of the uncle, the father's brother, who told us in secret, for fear his brother might hear that: "He is dead. They want us to come and recognize him..."?

Would our inquiry make it possible for us to understand this reality? A reality in which every action which seems simple to us, for the Palestinians is really an excruciating procedure?

A reality in which nothing in their life is simple, and everything is either extremely complicated or utterly impossible?

If that is not enough, in this reality, they must over and over again express their gratitude to those at the end of the endless waiting, those who with their insolent and hostile faces open the gate, and the person who inspects their documents and then orders without a sound but with the movement of his finger: "proceed..."

And they don't forget to thank us as well, for seeing them, simply for having seen them and having been with them in their time of pain and sorrow.

The banality of the checkpoint and the roaring orders heard for above had dried our tears. The father, whose tears ran down the wrinkles in his cheeks, couldn't hear those sounds or see those sights. 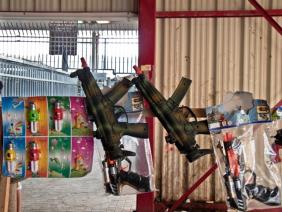 A man, who had yet turned 25 and had been working at Burnim which is Har-Homa, fell to his death from a height of eight meters.

At 13:00 the family at Ramalla was notified over the phone by the police. The father was requested to arrive at Qalandiya checkpoint and from there (so he was told) he would be taken to Jerusalem, where his son was to be found. - The father and his brother immediately headed off.

It was only at 17:40 that the father and uncle had passed through the checkpoint, they had been taken in a police car to the police station, where they identified the deceased's body.

At 20:00 that evening they passed the checkpoint together with the body, and headed back to Ramallah. For these, two ambulances were needed.

The bodies of the dead, like those of the living, can't pass directly through the checkpoint, but must be taken out of the first ambulance and then into the other.

That evening (the uncle told me over the phone), in accordance with their religious, and with the commandment of our religion that the deceased must not rest before burial, the young man was buried.

"He was building over there for the Jews", the uncle said, "The constructor was an Arab from Zeitim, from forty eight".