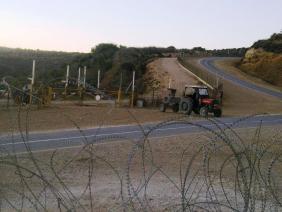 06:15  Tayba-Rummana checkpoint
On our way we passed the turn to the A’anin checkpoint, where those who already left A’anin for their lands in seam zone were gathered.

are open.  Border Police soldiers are there.  One say they’re always there; if we’d seen soldiers, apparently the Border Police soldiers were called away to another mission.
Two tractors and three pedestrian go through.  One of them says there will never be peace, because of Jerusalem.  A Rummana resident says he has 15 dunums of olive trees in the seam zone; this is the first time he’s been granted an agricultural permit.  He says residents of Rummana have a total of 200 dunums in the seam zone.  Since they can’t take care of the groves on a continuing basis, cows enjoy the olives.
We enjoy a glorious sunrise.
06:30  The Border Police soldiers lock the checkpoint gates.

06:40  A’anin checkpoint
The checkpoint is still open.  A man and wife are the last to go through.  Children from the Bedouin village at the foot of the checkpoint on the seam zone side wait for their ride to school in Umm Reihan.  Girls show us their textbooks for their Koran and English classes.

The checkpoint opens at 06:00 during the olive harvest, and by now the farmers have already gone through.  Most now crossing are teachers and pupils.  The sun that rose at the Tayba-Rummana checkpoint is blinding here.

An Umm Reihan resident says that he, his wife and children are registered as permanent residents of the seam zone, except for one son, aged 17, whose registered as a resident of A’anin.  The reason might be that the son, like his other children, is a pupil at the school in A’anin.  He says it’s better to go to school in A’anin, because the school there is connected to the electricity grid and they can use computers.  The school in Umm Reihan, in the seam zone, is not connected to the electricity gird.

This time we observe the terminal entrance on the seam zone side.  Those exiting say the terminal is full, and report that it takes people between 15 minute to an hour to go through.
In front of the vehicle checkpoint, on the seam zone side, seven loaded pickup truck wait for inspection.  Passengers of a minibus get out to have their ID’s checked before continuing to the West Bank.