We heard many complaints from Palestinian laborers about the crossing on Fridays.

The facility opens an hour later, at 05:00.  A previous report on Irtah on Friday was written by Snait on 21 May 2010.  We returned to make sure that the difficult sights we saw at the end of May were not unusual.

In general, the number of people who came here this morning looked about the same as the number we saw that Friday at the end of May.  A very crowded line, very hard to estimate how many people waiting on line – we think there are more than a thousand crowded together in the lane into the facility in front of the revolving gates

, a lane bordered by fences higher than people are tall.  People stand jammed together.  Sometimes we see someone climb onto the fence because he has no place to stand.  When this happens, others push people back to give him a little room.  Women have a place next to a side gate near the turnstiles.  An Israeli-Palestinian employed at the facility opens the gate a little before 05:00.  Some of the women  are seated on the ground. 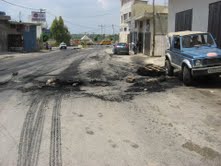 photo: the line from 05:30, after daybreak.
It’s already a little less crowded at this hour.

The facility opens at 05:03.  The revolving gates turn until about 30 people are in the space between them and the metal detectors at the entrance to the facility, and then lock.  A few people will be locked inside the revolving gates.
A photo is attached.
You can hear the inspector calling over the PA system, “Go back!” “One at a time!” “Remove everything, everything.  The tuna, the hummus, olives, everything.”

Inspection seems to go faster today.  Like on that Friday at the end of May, three inspection stations were operating today (one of them for women and elderly men), but today the line wasn’t stopped frequently as it was then.
At 06:15  the line was already much shorter.  The shouting we’d heard from within the facility from the moment it had opened to inspect the laborers also ceased.

One woman’s story:  She’s from Irtah, 67(!) years old, an agricultural worker.  This week she mostly picked peppers.  She crosses here daily.  Arrives about an hour before the facility opens in order to get a place on line.  I remember her from previous visits; she has her usual place next to the revolving gate nearest the fence next to which we’re standing.  She always sits hunched over, leaning on the metal, rises only when she hears the announcement that the facility will open.  Today she exited the facility with bleeding fingers on both hands.  She said that she was crushed against the fence because of the crowding.
A man from Nablus says he can’t cross here every day.  He’s a construction laborer, a tile-layer, working in buildings still under construction and sleeping in them from Sunday through Thursday night “without doors or windows.”  Border Police come by every night, at about 1 AM.  Another man sees my camera

and asks us not to write that they’re standing in line like chickens in a henhouse or like cattle.  He read Amira Hass’s article this week in Ha’aretz, in which she refers to the fences at Qalandiya and writes that the place looks like a henhouse.  He felt insulted.  I said that Amira was trying to describe the checkpoint to the reader, to show how Israel tramples people’s dignity.  He said he understands that, but was still embarrassed.  His wife, who remains in the villages, doesn’t see the checkpoint.

Two laborers wait near the entrance gate to the facility on the Israeli side.  They arrived a little before five (we saw them at 05:10), worked all night laying sewer pipes in a number of main streets in Netanya, and now want to return home.  But at this hour people can only cross in one direction, into Israel, and they wait.  They’re amazingly patient and quiet at this hour in the morning after working all night.  I approached a security guard in the parking lot to make sure that people in the facility are aware of them (he said yes).  Galila saw an open window and tried to make contact with the person whose face appeared at the window, a rare occurrence at the Irtah inspection facility – I’ve been coming here for a year and have never seen a face in the window.  The window shut in her face.  The taxi driver waiting for them on the other side gave up and drove off.
Only at 06:10 were they allowed through.  And why?  After all, they aren’t the first Palestinians, and certainly not the last, who return to the West Bank in the morning because they’re employed in jobs that are done at night in order not to inconvenience us.

The Irtah facility closes at 13:00 on Fridays, so the short workday means that getting to and from work takes more time than is spent on the job.  Many complain that it’s not worth working Friday, but they’re obligated to their employers.  Some of the men return later, through the Te’enim crossing

The usual sights.  When we arrived a group of laborers was waiting on the far side of the checkpoint, on their way from Habla into Israel.  Few cross at this hour in the opposite direction.  A few minutes after we arrived the checkpoint opened.  Some of the laborers work in the nearby plant

nurseries, others on their land on other side of the separation barrier.  On Fridays, families on their way to Friday prayer in Jerusalem also come through.
photo: one of the families: A mother and three children, the older boys wearing small backpacks, returning to Habla.