It was a pleasant Saturday, with the sun concealed behind autumn clouds. We arrived in the area by bus through the "Olive Coalition" and split to help two families.

The Olive Grove of Ma'aruf Zaharan was organized for our arrival. Plastic sheets ("Shada") were already spread between the trees with plastic rakes.

The trees were olive laden. The grove is watered by pierced irrigation pipes from a water source that supplies good drinking water which serves also the local agriculture. In the agricultural area of Qalqiliya there are many water wells. Zaharan's grove was planted in 2000 when the traffic was allowed for Palestinians. It is a grove of 220 trees on an area of 6 dunams. In 2002 the permit regime began, and with it came the problems.

Zaharan was mayor of Qalqiliya till 2005 and now serves as deputy minister of the interior at the Palestinian Authority and works at Ramallah during the week.

In the course of the morning we were invited for a meal at the water well, to the noise of the water pump. In our honor a table with a traditional breakfast was laid.

During a break we asked Zaharan about the problems the farmers at Qalqiliya and the Seam Zone are faced with.

1.Non dispensation of permits. Permits are given only to the owner of the land and perhaps to two members of the family. Sometimes the elders are not capable of work.

2. Opening times of the agricultural gates

In many case the soldiers arrive late and the Palestinians wait for an hour or two.

Many of the complains are about the opening of the gates. Avi from the brigade promised to Zaharan to open the gate for 20 hours. That was 3 months ago but nothing happened. The farmers organized a protest demonstration, to no avail.

3. Transfer of tools for water purification. There are no authorizations for the transfer although there are funds for this.

4. Transfer of fuel by tanker. One has to transfer it in barrels with donkeys.
5. Boars.  A few years ago somebody brought boars from the Golan to the area. The wild boars harm the vegetable areas, and the Palestinians are unable to hunt them.

What are his memories as a child?

His father used to take him to their agricultural areas and there they would work the soil and grow vegetable. He had a bee-hive and the exported the honey to the Arab countries, when all was open.

What are his concerns? Zaharn in his capacity meets many Israelis and he has many friends. His relations with Ya'akov Manor date from the nineties.

According to him if there is no solution to the negotiations now, there is danger of a violent outburst in the area. This will be initiated by the extremists. He expressed concern about the young educated people leaving the West Bank, as they lack opportunities. He is concerned about what despair and hopelessness will cause…His dream is to finish the cycle of violence, that there be peace between the two states, open borders and the build up of  trust. We asked about his sons who were with us. He has sent both to workshops with young Israelis in Germany. All his children study at universities, including his wife. His son Mahmud (24) studies political science at Abu Dis, dreams to reach the….sea. Was there the last time 5 years ago.  Aspires to build his home at Ramallah. Hopes to find work at the Authority.

In the end Zaharan told us about the arrest of his young son this summer. The army detains people all the time, even Fatah people. Curfew in the middle of the night and then release…just like that, pass a message…In the summer he and his wife were in Turkey, and he got a phone call that the army entered his house at night and destroyed things while carrying out a search…In the end they found a rifle which the Authority had given him for self defence, in his bedroom. As a result they detained his young son (17) for a week. The son returned traumatized. 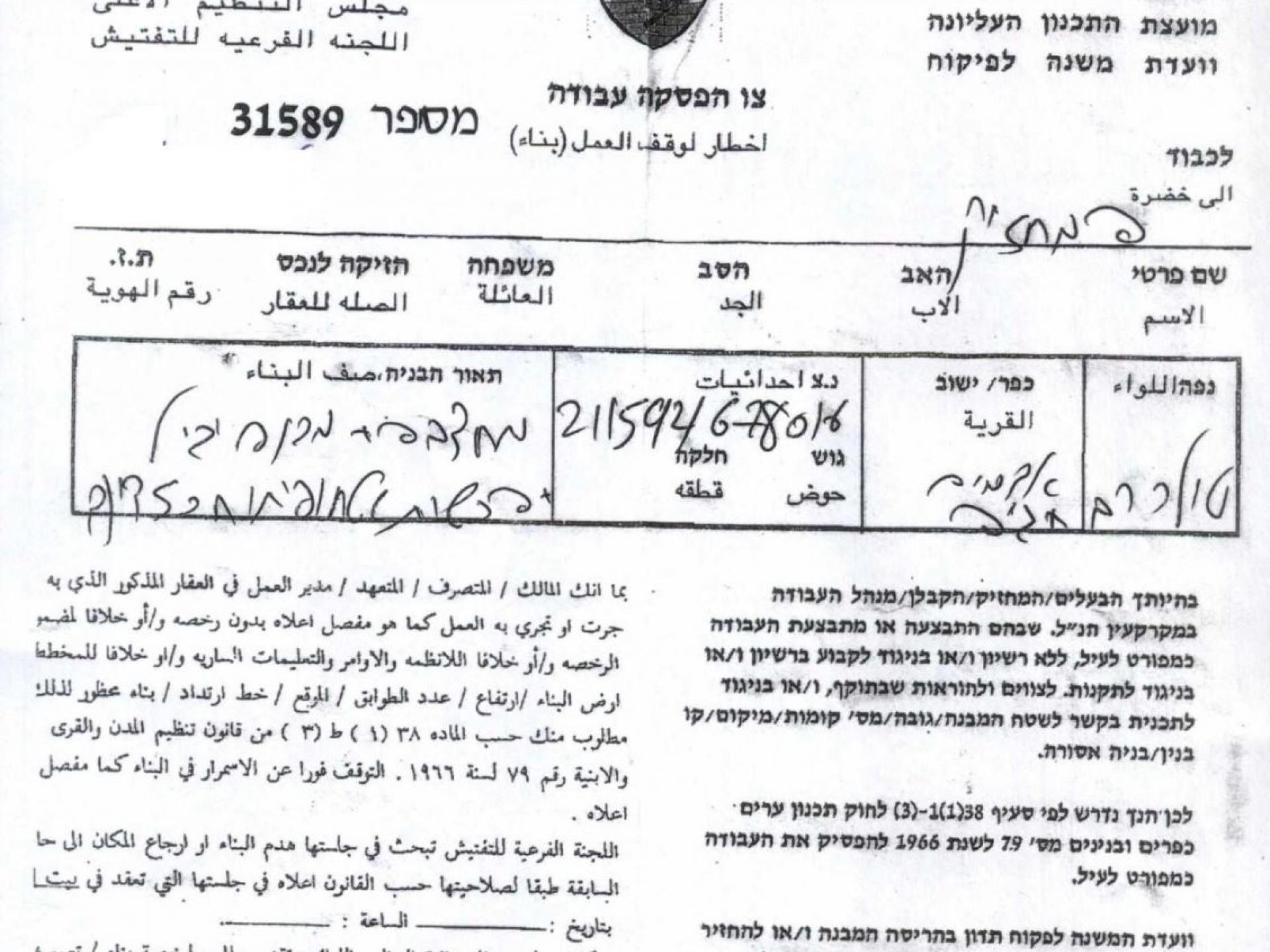 Demolition order for the quarry