Some of the checkpoints are back again, “for the holidays.”

Though it’s a holiday for the Jews, the Palestinians are allowed through.

Despite the holiday and the closure

, the gate to Azzun Atma is manned.  Two lone soldiers (there may have been a third soldier in the tower) guard the gate.  Because of the holiday the laborers aren’t building in the settlements so there are no female MP’s at the computer terminals.  We saw only children going to school.  We don’t know whether people are allowed to leave the village.  The soldiers didn’t want to talk to us.

Za’tara/Tapuach:  No line, traffic flows (only Palestinians, of course).  Lovely sea squills blooming on the roadside.

The checkpoint has been resurrected.  A bunch of sergeants and an officer from the artillery corps man it.  A spike barrier across the road allows only one vehicle at a time to come through, so a line forms both into the city and coming out.  The soldiers stop every vehicle, some are asked only for ID’s, other have to get out and open the trunk.  We asked the officer about this new policy; he said there are alerts and inspections must be more rigorous.  We tried to convince him to allocate soldiers to conduct inspections in two lanes, for cars coming in and those leaving, but he said:  No way.  We saw we were wasting our words on these soldiers, highly motivated to defend Israel’s security with their bodies in the face of threats from Beit Furik, and left the checkpoint.  Let’s hope they’ll be less frightened as time passes.  [They also wanted us to stand in back of the concrete cubes, so we won’t be harmed, only a few minutes after we had walked confidently through the town’s alleys when we visited A.].

08:35  Awarta:  The checkpoint is open, despite the holiday and closure.  Naha”l soldiers still man it.  A quick inspection and trucks continue on their way.  We see from afar a long, long line at Huwwara, like in the bad old days, and we hurry to see what happened.

Like we said, a very long line at the exit from the city.  Traffic to the city flows, including cars with yellow license plates.  We park, the soldiers at the entrance to the parking lot don’t ask us any questions – they just asked to see our badge, and we went over to the checkpoint.  The Naha”l commander hurries over to make sure we don’t enter the area closed to pedestrians.  We ask about the line but he doesn’t go into detail”  “Something happened earlier and we had to check it out carefully.”  And, in fact, the soldier quickly returns to his post and traffic begins flowing, though from time to time he stops a car and asks to see ID’s – which immediately causes a line to form.

09:45  Shomron Crossing:  Only we and cyclists at the entrance to Israel.  Border police and regular police inspect ID’s of Israeli Arabs entering the territories, creating a lengthening line that also includes tourist buses.  We couldn’t understand who’s touring the territories while their leaders are in synagogue.

We asked the bored security guards why they’re inspecting people leaving the county, but not those entering (security!), but they didn’t understand what we meant by “entering.” 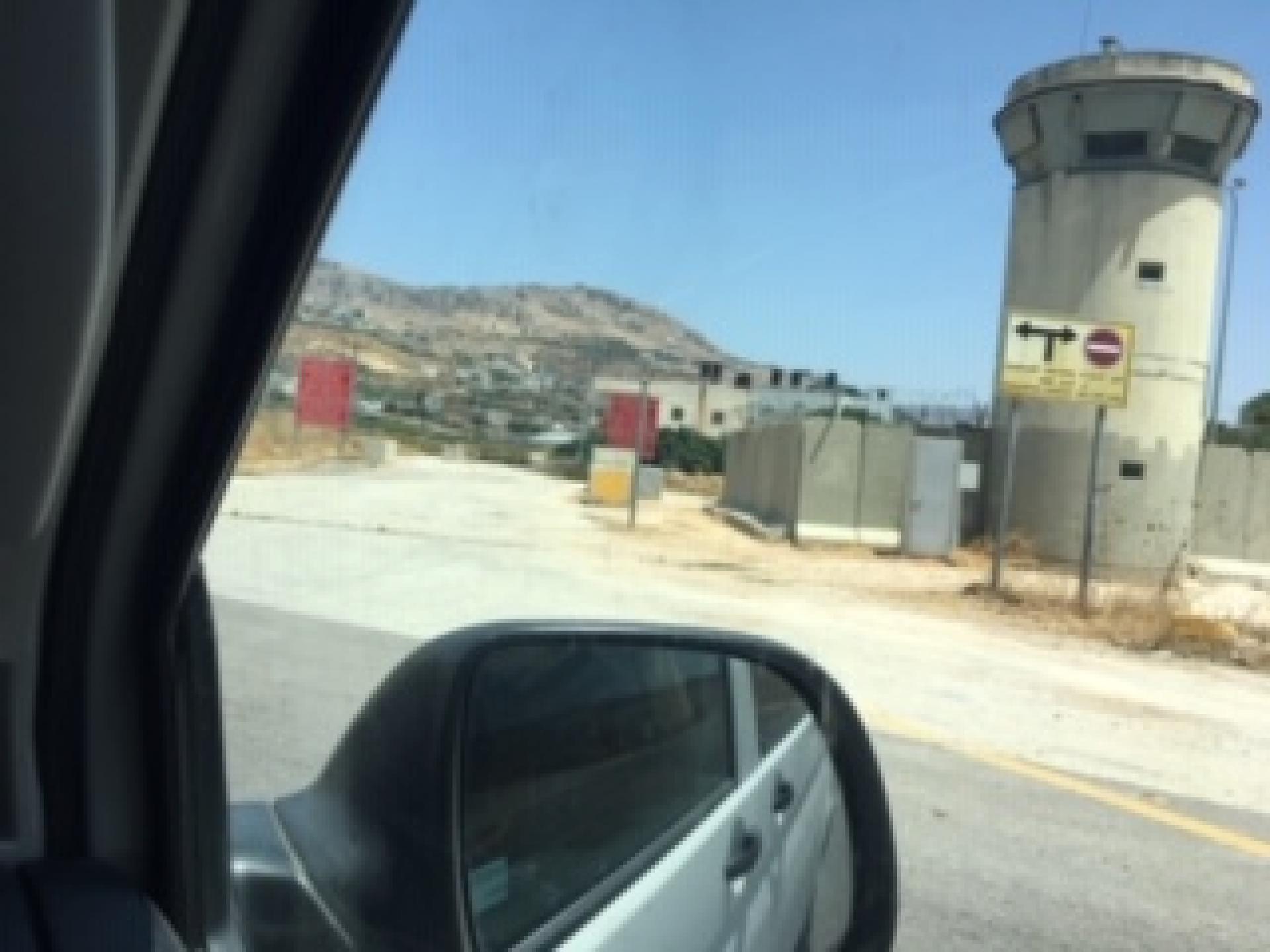 The Shomron checkpoint for vehicles. is located east of Rosh HaAyin and Kafr Qassem, on Road 5 (Trans-Samaria) leading to Ariel and the Za'atara junction. It is intended for blue ID cardholders, foreign guests or diplomats, and international organizations only. In 2009 the management was entrusted to a civil security company.