Sansana
At 06:45 MIchal was already in the transit receiving phone calls that the situation was terrible and where were we?  We were there, and there were hords of people, waiting.  There were shouts from inside, complainnig that only one sleeve

was operating.  Why?  Why not operate both – they claimed that the situation was the same yesterday.  The bathrooms were filthy, and there were piles of garbage around. Why can’t the place be kept clean?  Why aren’t the garbage cans emptied regularly?

I don’t know why but when we arrived, the line started moving forward and people entered quickly, but some of them who work in Mitzpeh Ramon, for example, had already wasted a lot of time – they claim that the checkpoint opened at 4:30am rather than 4am, and that this half-hour delay is detrimental. Three busses of families on their way to visit prisoners were already waiting. The Red Cross worker and drivers said that things were ok on Sunday.  It appears that phone calls to S, the CP manager, are helpful.

Checkpoints have been eliminated?  Roadblocks have been removed?
·      Below the settlement of Etniel where the polluted Hebron River flows we saw an ambulance trying to reach Road 60 – the yellow gate was closed, so it couldn’t get through.  It also cannot get through directly via the entrance to Dahariya – because that is blocked by a roadblock of earth and rubble and so, it will have to go through Dahariya and from there on to Dura and Abda – where it was called for. What could take a mere 5min., if done on the main road, will thus take at least half an hour -- which we eventually know, because we waited for him.  Apparently an ambulance from Bethlehem was waiting for him in Abda with a kidney patient who had received a special permit to visit her son in the prison in Be’er Sheva.  The ambulance from Bethlehem cannot go directly to the Sansana crossing – only up to Abda.  When we asked why, the drivers explained that this was arranged between the Red Cross and the Red Crescent.  This time the trip was planned, but what would have happened if someone had to go to Abda in an emergency?  It would take a half hour.  Ambulances are still not permitted to enter Tel Romeida in Hebron.
·      The Olive CP: Nachshon Regiment soldiers from the Kfir brigade decided to set up a surprise roadblock there.  Why?  Because CPs are being eliminated and roadblocks are being taken down.  A long line of about 200 cars is waiting on Road 35.  An officer and two soldiers check documents.  Why is this regiment here and not in Tul Karem and Nablus?  On the other side, there is a long line of cars waiting to leave Hebron.  Heaven knows why the soldiers say that there are alerts – but the document checks are not at all thorough.  Passengers are not made to get out of their cars and cars entering Hebron are being checked, while those leaving it are not. Therefore the conclusion is that there is no logic besides the wish to harass and humiliate, and to assert who’s the boss here: The soldiers perform the actual check within the framework of “polite occupation” without incitement, calm, and at their leisure.  20 minutes later, a jeep arrives and the soldiers jump in: the surprise checkpoint evaporates. ·      The crossing from Beit Anoun to Hebron is closed, and so, too, are the entrances to Dahariya; from Bnei Haim to Hebron; and the one right below Beit Hagai. Obama has already received the Nobel Peace Prize, how would any pressure help?
·      The expansion of settlements and usurping of land: Above Beit Hagai there is a new pillbox and we enter Beit Hagai to check after a telephone call to arrange things with Hagit from Peace Now.  The first thing we did was to remove our tags and the “Machsom Watch” sign from the car – and we were allowed to enter without question.  We drove through and saw that the Yossi lookout point on the Rahavam road is now an illegal outpost and the pillbox built there was abandoned.  Another building stands very close by, with an Israeli flag flying atop, but unmanned.  The outpost on the way to Kiryat Arba expanded and all 100 meters are now covered with buildings.  When we entered Hebron we saw that there were no worshippers in the outpost of the Hazon David Synagogue.

Hebron
The Barak Regiment of the Golani Brigade is now stationed in Hebron and their presence is felt less than that of the paratroopers whom they replaced. However, checkpoints and roadblocks are still in place and Hebron still looks deserted.
Curve 160: The checkpoints on both sides of the Zion Route, Curve 160, and Kafisha neighborhood will not be taken down anytime soon. We know this for a fact now, because chemical toilets were set up here: they will surely be here until a decision is finally taken. These checkpoints, similarly to those at the Patriarchs' tombs' cave, are manned by Border Police soldiers.
Patriarchs' Tombs' Cave: Three young people are detained and held there, standing, for 20 min. without being listed. Ofer is there but this time he does not harass us, and Anat Cohen sees us without stopping. Deafening music comes from Beit Gutnick as usual. One of the storekeepers tells us that their stores were shut for two during Sukot, and that in the remainder of the holiday the settlers’ children prevented them from opening, preventing people from buying anything.
The House of Dispute CP: The CP operates like all others, even though there are no settlers here anymore.
The Wholesale Market: The Jewish settlement in Hebron has posted new posters.  The furniture is still left in the rooms evacuated by the settlers, to demonstrate how the Jews have been mistreated.

Two Stories of People Suffering from the Occupation
·      In the grocery store at Idna we met a young man from Bnei Naim with a broken nose.  He told us that his nose was broken from a beating he had received from soldiers five months ago near Ramadin when he tried to infiltrate to work in Israel.  They had tried to fix his nose at the Aliya Hospital in Hebron but without a great deal of success.  HE is now trying to get permission to receive treatment in Israel gut it is not going so well.  We connected him with people from “B’tzelem” who deal with people who were beaten by soldiers.
·      A worker a little over 40yrs old told us that he has a permit to enter Israel until November 24th, 2009 and he has an employer in Rishon L’Tzion who wants him.  One morning without any reason someone from the civil authority in the Tarkomiya CP took his permit without any explanation. All he was told was he had to go over to the Liaison and Coordination Administration at Etzion to get it back. Going there, he was told that it would be returned to him only if his employer came. He contacted Sylvia by phone and couldn't understand why he was not helped…We connected him with Yael Shalem in hopes that she might be successful.

An Economic Disaster:
This year the olive crop is in a terrible state – People who normally harvest seven tons of olives in their orchards, haven't been able to harvest even seven kgs this year! The Palestinians don’t understand why, claiming it's not only due to the poor rainfall this past winter. Olive oil will be extremely dear in the coming year for this reason, and the olive press in Tarkomiya, next to the grocery, hasn't even opened yet.

Tarkomiya
During the hour we spent there the crossing operated as usual. Trucks were waiting in the parking lot next to the new road built with EU and US funds -- it is to replace Road 35. 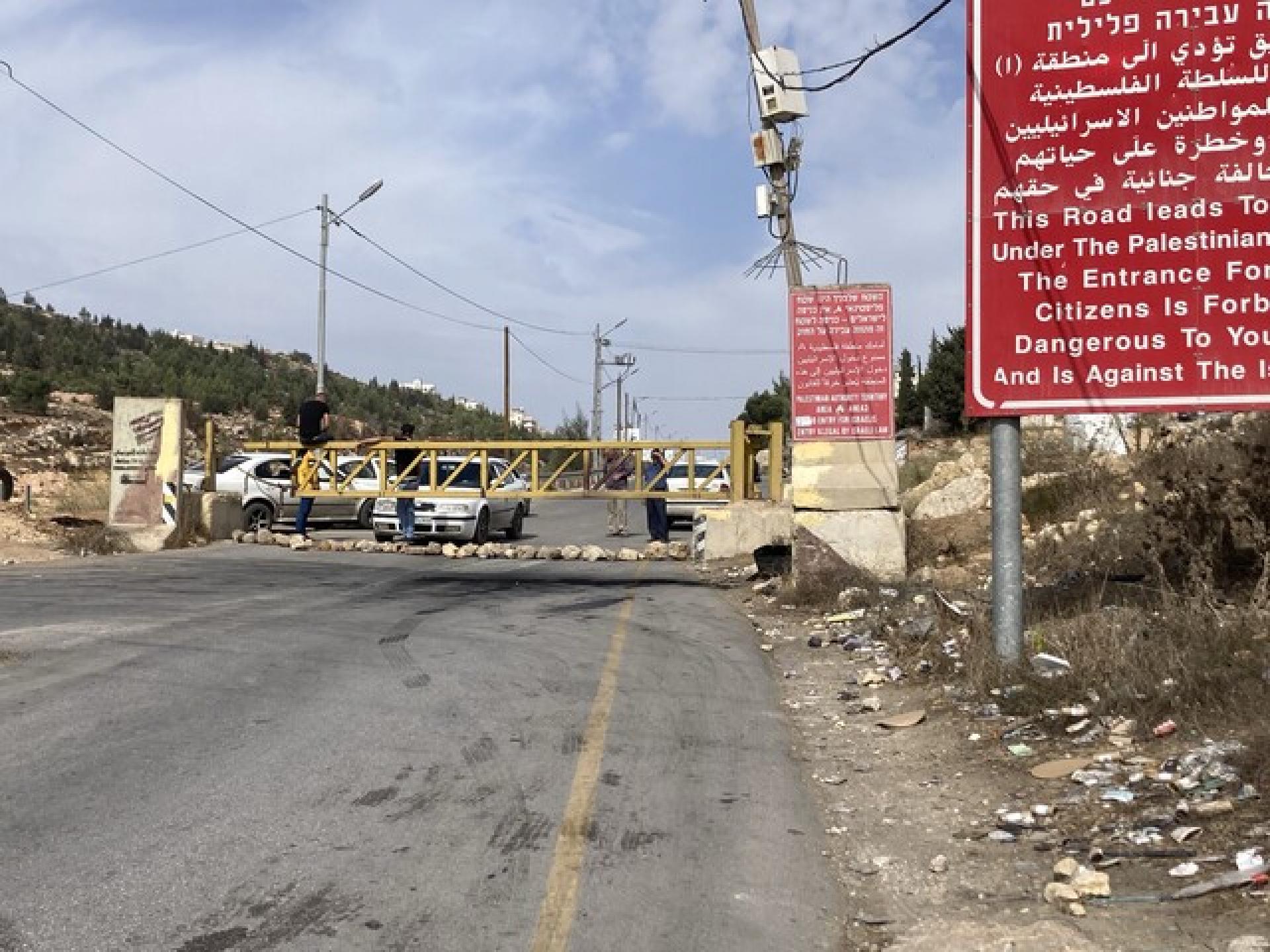 The gate to Dura is closed 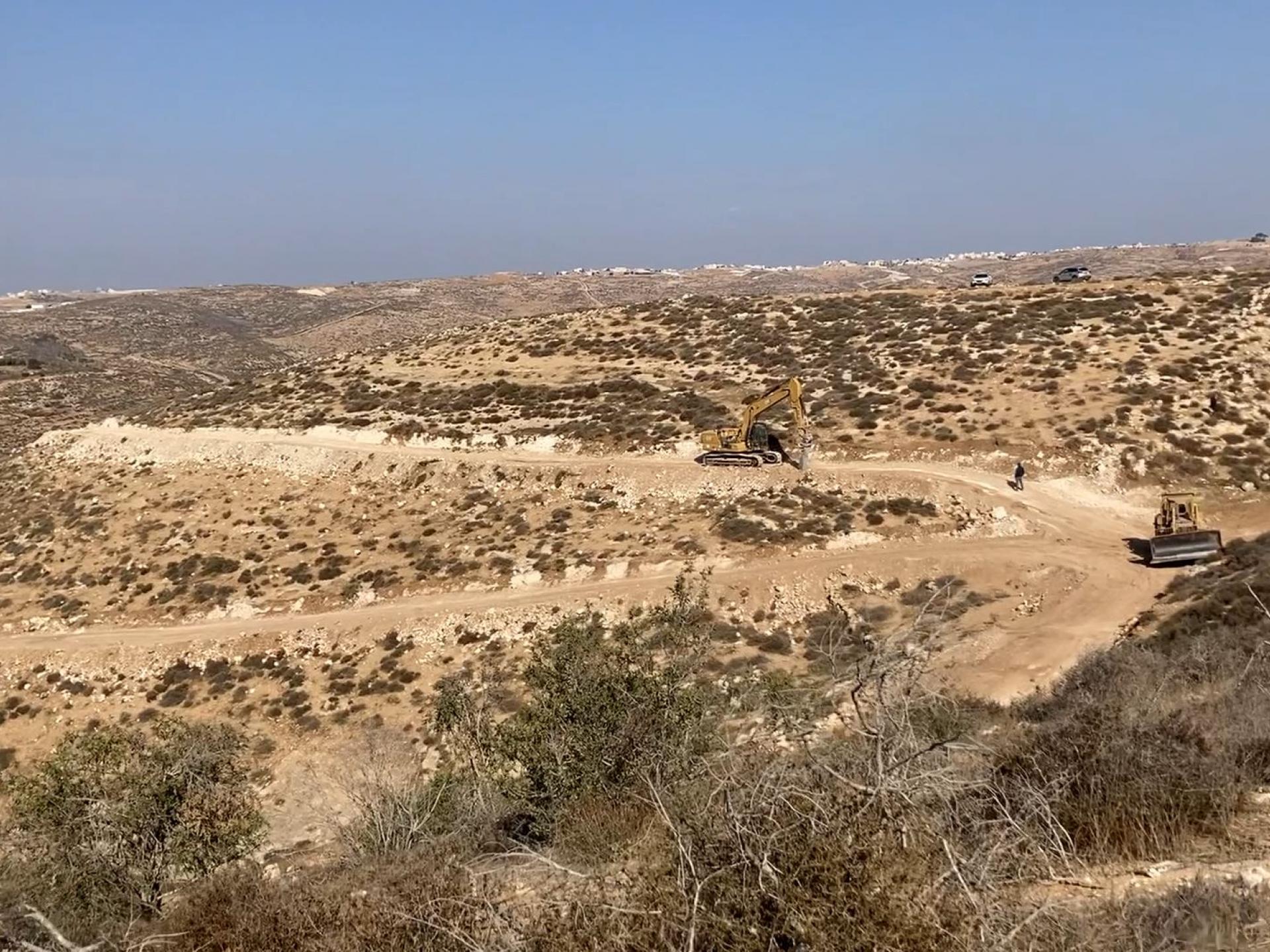 A new breakthrough in the southern Hebron Mountains