Our regular shifts in the central area of the West Bank, around Nablus, Qalqiliya and Tulkarm, are today, and have been for the past few months, less to do with "checkpoints," but all about the 42-year-long criminal occupation.  We are aware that most Israelis live a lie, go on with the routine of their lives, pretend that the occupation does not exist, that it is just, temporary and unavoidable. They close their eyes and hope for the best. "It'll be fine." We have not only to admit the truth, promote freedom of expression in our own unique way, protest, document and expose but make our fellow Israeli citizens understand that they are helping to perpetrate a gross injustice at the same time as we express a value that is fundamental to every democracy: the right to give expression to differences.

Traffic is busy in both directions, in and out of this seam line village. Trunks of all vehicles, IDs and permits are inspected although the driver also has had to enter the concrete compound on the far side of the dusty separation roadway.

There are four soldiers, including one military policewoman, on the separation barrier. The occupation, it appears, is so old, that the Israeli flag, instead of flying bravely in the welcome cooling breeze, is in tatters. One soldier in the lookout position, high above the check post below is well shaded by camouflage netting, big boulders surrounding his position as well as coils and coils of razor wire. Our arrival is greeted by this soldier calling to his mates that we've arrived (on foot - the car is parked on the non existent roadway leading to the village).

From this seam line checkpoint, the road works and new retaining walls in process of being built around Alfe Menashe are clearly in sight, heavy equipment moving the creamy white rocks and earth. The white dust makes waves, clearly visible from where we are, several kilometers south, marking clearly an intensification of the Occupation.

Two men emerge from the concrete hut; the back of the truck is examined for a long time and the permit is found to be "deficient." "What you're carrying is forbidden," shouts the sergeant commander, over and over again. We have to wonder what dangerous element is being carried out of the village: a bed! The soldier goes on scolding, "Some things are forbidden, including a bed."  And he repeats this mantra over and over. "The authorization for this truck is not that a bed be carried."

The IDs are held by the soldier, and only when the truck is safely turned around, facing Ras Atiya, does he return the IDs of driver and passenger.

13:45 -- we are told to move back to near where our car is parked. We see that a big truck with an equally big driver also has problems crossing from the village, and just then, an open pickup truck arrives, disgorging five men who pass the turnstile to enter the enclosed concrete building on the Ras Atiya side of the gate. It takes them all of three minutes to pass through.

The commander smokes a cigarette as a few minutes' quiet is soon disturbed by the next IDF created scene. The village, according to this commander's behavior and acts, must remain a prison for the hapless Palestinians who live there. To another approaching pickup truck, he loudly proclaims, "Let me be clear. You've brought things out once, you can't again. Come tomorrow. You can't today." And to make things clear also to us, he says, "They know the laws." Next, the commander who must meddle for ill about everything, now follows the unfortunate truck to the village side. The driver, speaking in fluent Hebrew, and the soldier in his mother tongue, shout at each other. "Go away," the soldier calls out. One of us begins to make phone calls as the other stands on the village side of the Separation Barrier. To us, the annoyed soldier, furious that we're not standing where good little women should, proclaims "They never argue when you're not here." Good, we think, we're actually, according to this soldier, empowering the population!

Meanwhile our phone calls result in the following "help." The soldier who answers the phone at the Humanitarian Center wonders if Ras Atiya is "near Jerusalem." One soldier in the DCL office says he's already talked to somebody here about the "lack of authorization." Evidently to no avail. But fifteen minutes later, we get a promise from a higher up in the DCL office that somebody will be here in fifteen minutes.

14:00 -- a car, leaving the village, is checked inside, outside, including every black plastic shopping bag.

The commander again comes over to us to complain about our being there, "All problems are because of you."

At this time, another truck is made to return to the village, as is another car, but an NGO car with ACTED on the side crosses into the village.

14:25 -- a jeep arrives, the food jeep, which disgorges four soldiers, including a second lieutenant and packages of aluminum wrapped food. The second lieutenant greets us pleasantly, then begins to lecture us, "You can't cross the red line." (That's a new one, but it's pretty certain he knows not what the Green Line is). "We are protecting Israeli citizens," he tells us with a solemn face. "You can stand up there," he waves at the hillside above the checkpoint and "take photos" (the exact opposite of the sergeant commander's ruling).

The eight soldiers now flaunt their eating - in accord, of course, with the "special sensitivity" promulgated by the IDF about the respect its soldiers would show for Ramadan.  The second lieutenant eats a plum as the soldier from the lookout position walks slowly back up the hill, eating from his aluminum package.

14:45 -- a young man steps out of a pickup truck with Israeli license plates (yellow), carrying, with great difficulty, two large mattresses atop a baby

carriage, thankfully, no baby inside, although the carriage is, of course, checked as he makes his way, with great difficulty down to the checking post  and then to the village on the other side. The soldiers sit and observe the young man struggling to make his way across the "red line." They continue eating.

14:50 -- just as we are about to leave, the DCO's white jeep arrives. A two minute chat with the soldiers and the truck which has already passed across the "red line" once today, crosses it again: permission granted! We assume traffic will now flow smoothly as W., the officer in charge of the crossings on the Separation Barrier, tells us that the soldiers were wrong, and don't know what to do. Indeed!

A family, parents and three little girls, sit in the concrete shelter atop the checkpoint and Separation Wall. W. gets a bottle of water from where the soldiers sit, fills it from the water containers placed by them, clambers back up the hill and hands it to the little girls. The father, who can't, of course, partake of a drink, beams, "He's a real human being."

The village beyond the junction boasts a newly painted, pristinely white building, financed by the Arab Development Bank for economic development in villages affected by the separation wall."

A line of vehicles, very long, of Israeli (yellow license plates) and Palestinian vehicles (those with permits) stand patiently in line. There are blue police and border police looking into vehicles and they make one turn around: a Palestinian flat bed vehicle bearing a truck atop. Once we begin moving, we assume all will be well. The roadway, Route 55, is newly asphalted, no line, as yet, in the middle. But long before we get to Nabi Elias, the traffic comes to a complete halt. For a long while, no traffic in the opposite direction, then it starts, but we still don't move. Eventually, we creep to the entrance of the village, see that the line of vehicles is endless and hardly moves. For a traffic jam, we have no need to be here! We manage to turn back from whence we came, thinking that the settlers are probably the ones to benefit form the newly improved roadway - in time for Rosh HaShana.

Today is a day of surprises. Imagine, the checkpoint, the entry way to this Palestinian city, is once again manned, at the old and usual position, by two soldiers. We approach them, in the car, intending to turn around after we've asked them, "Wot, no checkpoints?" The soldier protests, "This is not a "machsom" (in Hebrew), it is a checkpoint (in English)."  Laughable if it weren't so indicative of a reality which has nothing to do with what the world is being told by everybody - except MachsomWatch! Checkpoints or no checkpoints is irrelevant, since the Occupation is alive and well and getting better all the time.....

All vehicles, but not the Egged bus, are checked, ours stared at (the MachsomWatch sign in the window).

Many returning workers, but the steady stream moves swiftly, it taking no more than one minute for a worker to enter the building and to exit it. 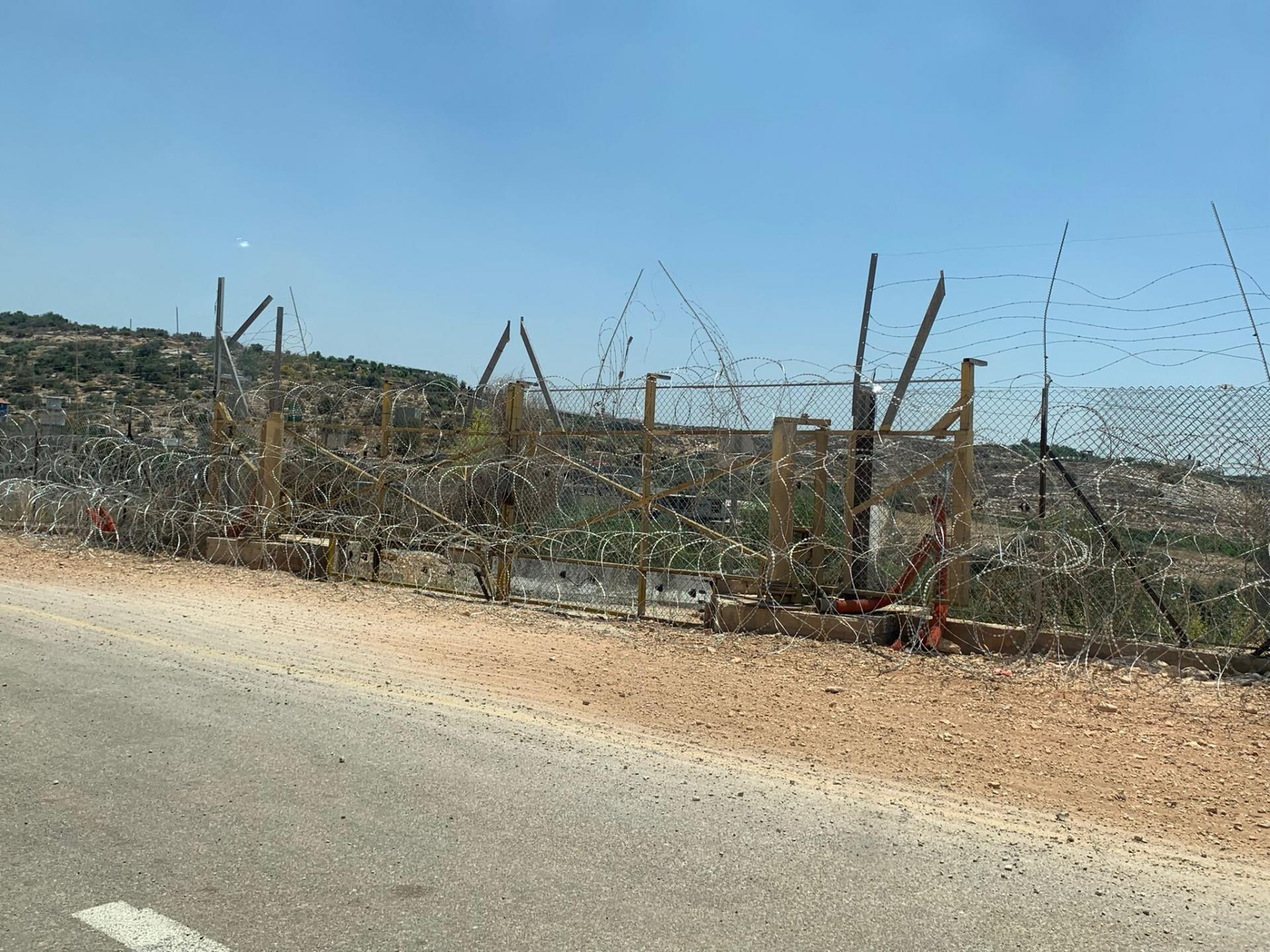