Watching the Northern West Bank for Over 15 Years: Shuli Bar 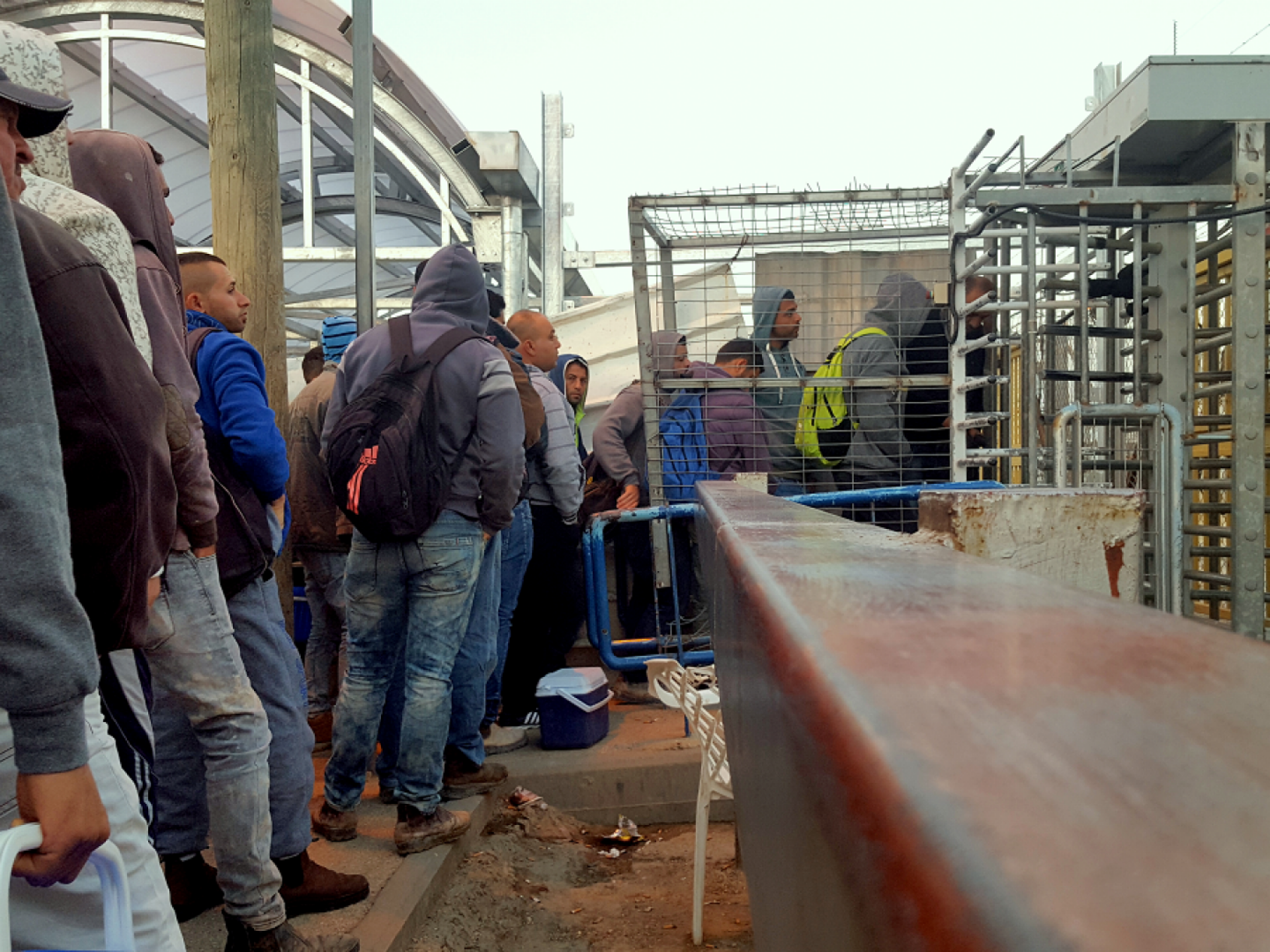 The northern group was established in 2003. Today after 15 years, this group is still monitoring and reporting on the checkpoints.

In the early years, the checkpoints were not controlled by rigid standards and electronic monitoring. Most of the checkpoints were blocked by a simple barrier gate that could be lifted and lowered. Soldiers determined who could and who couldn't pass through the jammed checkpoint. The checkpoints weren’t computerized at the time and calling headquarters for clarifications was nearly impossible. The situation could be described as permanent chaos.

The soldiers obeyed military guidelines, treating every Palestinian approaching the checkpoint  (including children, the elderly and pregnant women), as a potential suicide bomber.  Thus, the soldiers internalized the attitude that they were dealing with an enemy who was not entitled to any rights or considerations.  It goes without say that on the Palestinian side there was growing contempt and hatred. 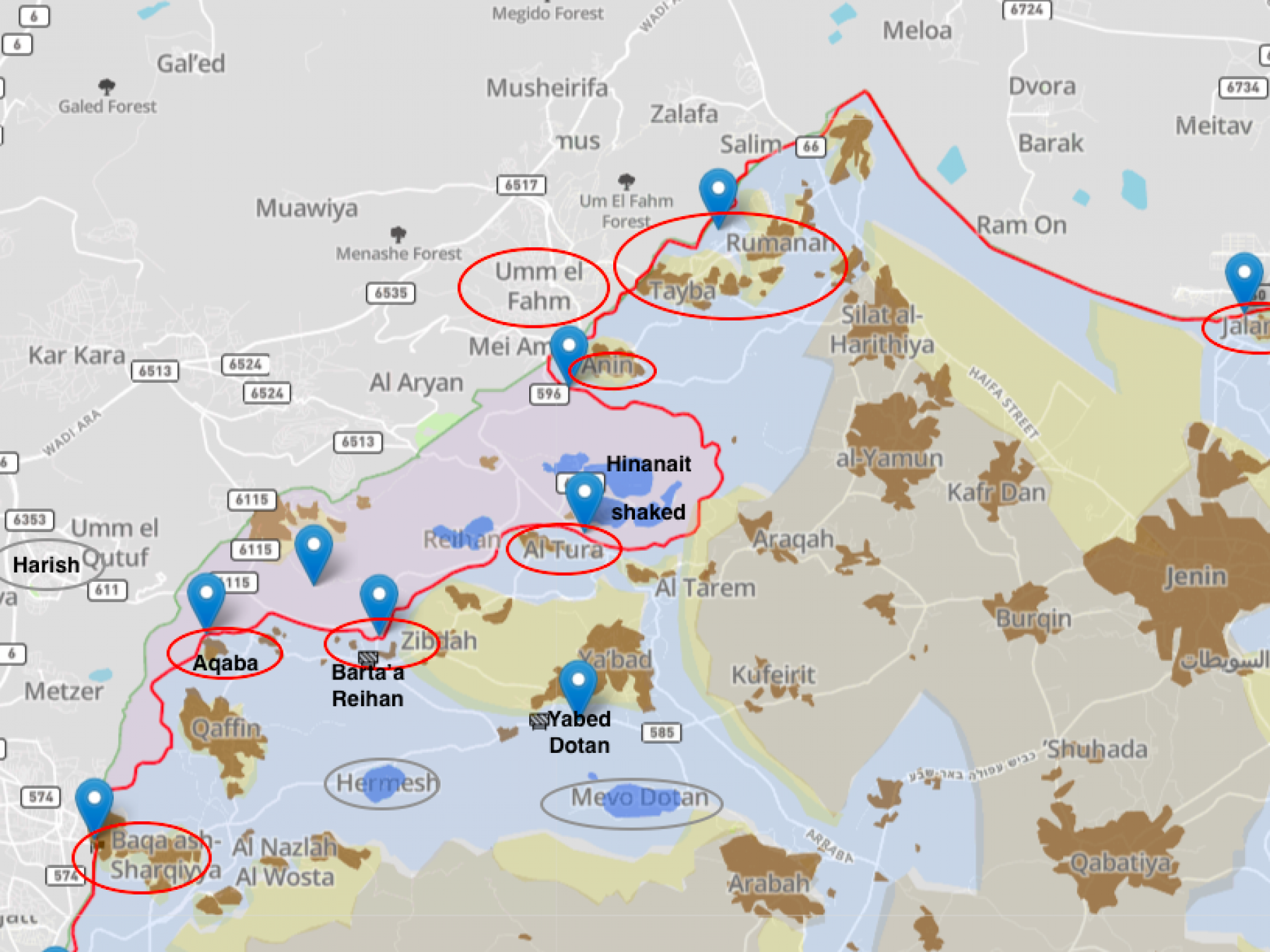 This is the world we entered when we began monitoring the checkpoints in the north. We were not always able to be passive observers and often we intervened, be it to remind a soldier that a sick baby

was on the way to a doctor on the other side of the fence, or to request that a farmer be permitted to transfer all the olives that had just been harvested.

Sometimes we placed an urgent call to District Command Office to ask that an officer be sent to help deal with a complex situation.  We found ourselves observing humiliating scenes and a patronizing and condescending approach toward the Palestinians.   Sometimes we asked to meet with the regional commanders in order to share our civilian observations and perspective. We also asked that humane considerations be added to the tight and strangling security rules.  We were always received politely and respectfully, served coffee and cake but in fact nothing changed.

In recent years, the regulations changed, the checkpoints improved, new devices were installed, and the soldiers were distanced from the Palestinian population at the checkpoints. But these so-called improvements represent an increasingly hardened approach toward the Palestinians and raise the level of hatred and loathing.

The largest of the checkpoints is at Barta'a, also known as the Reihan Crossing (see map). As of May 2007, Barta'a has been privatized and is managed and run by a private company subordinate to the Ministry of Defense. Every morning, thousands of Palestinian workers pass through the upgraded terminal, as they head to work as construction workers building the new town of Harish in the Haifa district, along with representatives of international organizations; as well as settlers from Mevo Dotan and Hermesh who are allowed to cross this checkpoint. 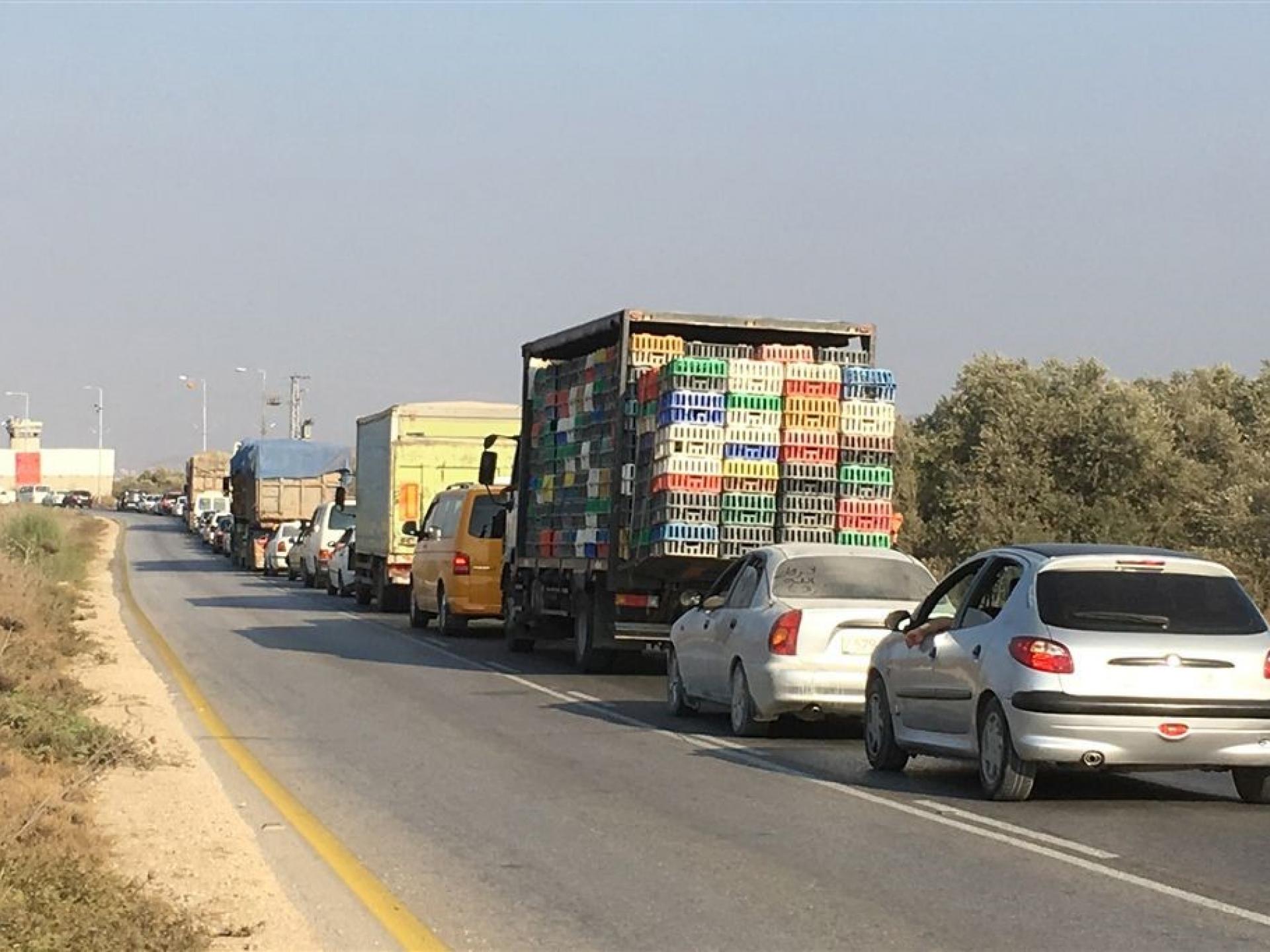 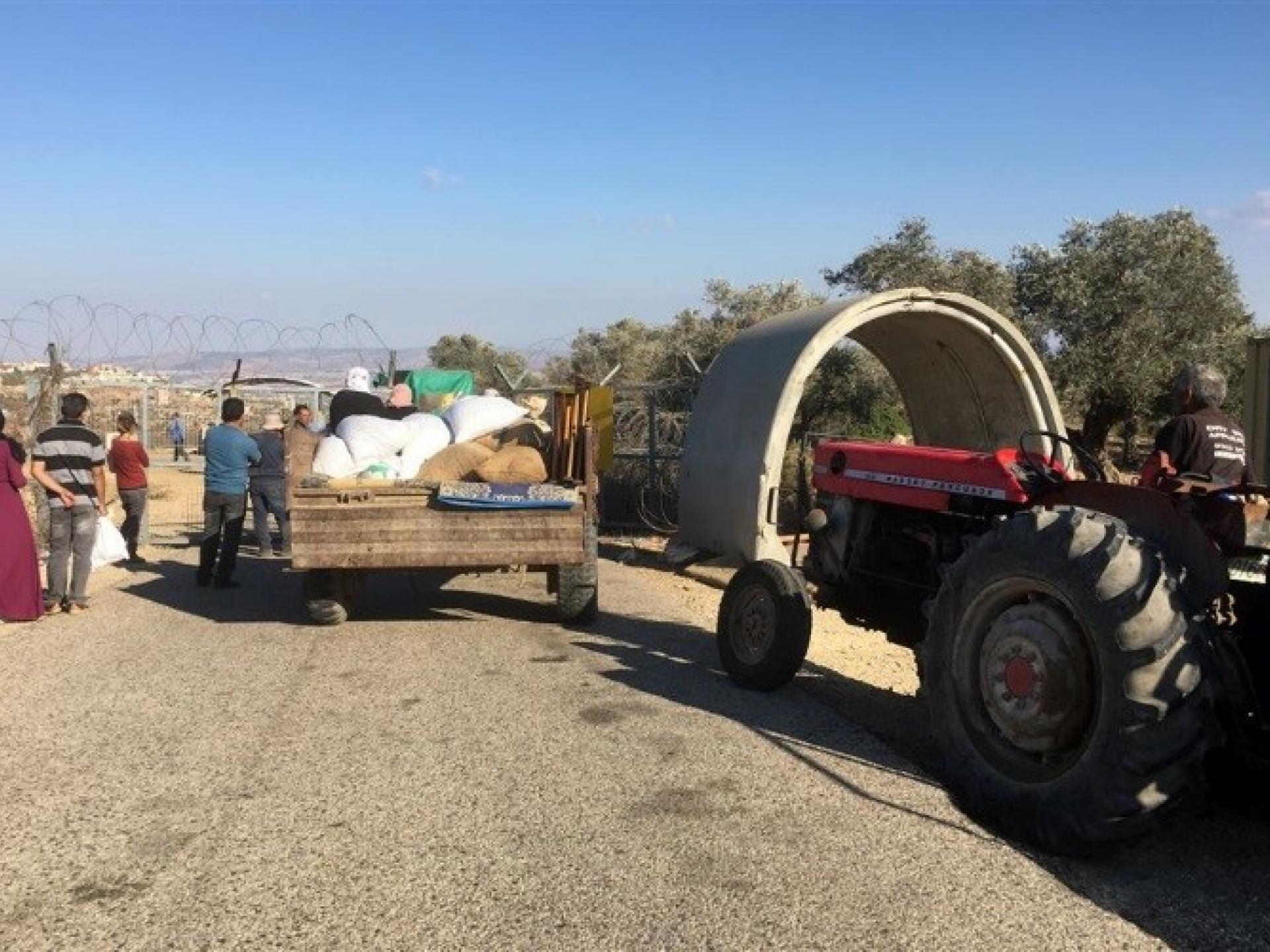 Goods and merchandise waiting at the checkpoint
Photographer:
Ruti Tuval

In a separate terminal, merchandise and goods are checked on their way from the West Bank to the Barta’a enclave (whose villages are trapped between the Green Line and the separation fence) and on to Israel.  The ongoing problems of overcrowding and unruliness on the long queues have been solved.  The authorities have recruited Palestinian security guards to watch over their own people.  The guards have been outfitted in black uniforms and armed with probes and stun grenades.

The seeming order and efficiency at the checkpoint itself is marred by the wretched permit regime, which continues to ignore the ability of Palestinians to navigate from one area in the West Bank to another. Obtaining a special permit or a work permit to work in Israel, keeping current permits, or renewing permits remain a formidable task. More and more Palestinians arrive at the checkpoint and learn that their valid permit has been rescinded by the authorities and that they cannot pass. They, of course, want to know “why?” the answer often is:  “just because.”

What can a Palestinian do?  The only thing he or she can do is go back to the offices of the Civil Administration at another checkpoint (at Salem, which is the central office for the northern region).  He can go there day after day. He can beg, he can wait long hours in long lines, and return home to his family empty handed, no permit in hand.  He can hire an attorney (at great expense), who in most cases does not deliver the required permit.  And that’s it.  At this breaking point, sometimes the security services show up and try to enlist collaborators from those who are in deep despair.

The second large checkpoint in the north is located on the Green Line near the Palestinian village known as Jalameh.  Here too there is a large terminal for the transfer of merchandise and for entrance into Israel.

AGRICULTURAL BARRIERS: One of the most severe violations to the human right of free movement has befallen the Palestinian farmers.  These farmers find themselves denied access to their agricultural lands.  It is almost impossible to describe the level of despair and exhaustion in these communities.   The impact on the lives, the livelihood and the property of these people cannot be measured.  These are communities whose entire livelihood and whose ancient cultural traditions are bound to their land.  The lands have not moved, the villages – some centuries old, remain.  But, from one day to another the access to the agricultural lands has gotten longer and more difficult, if not impossible to reach. 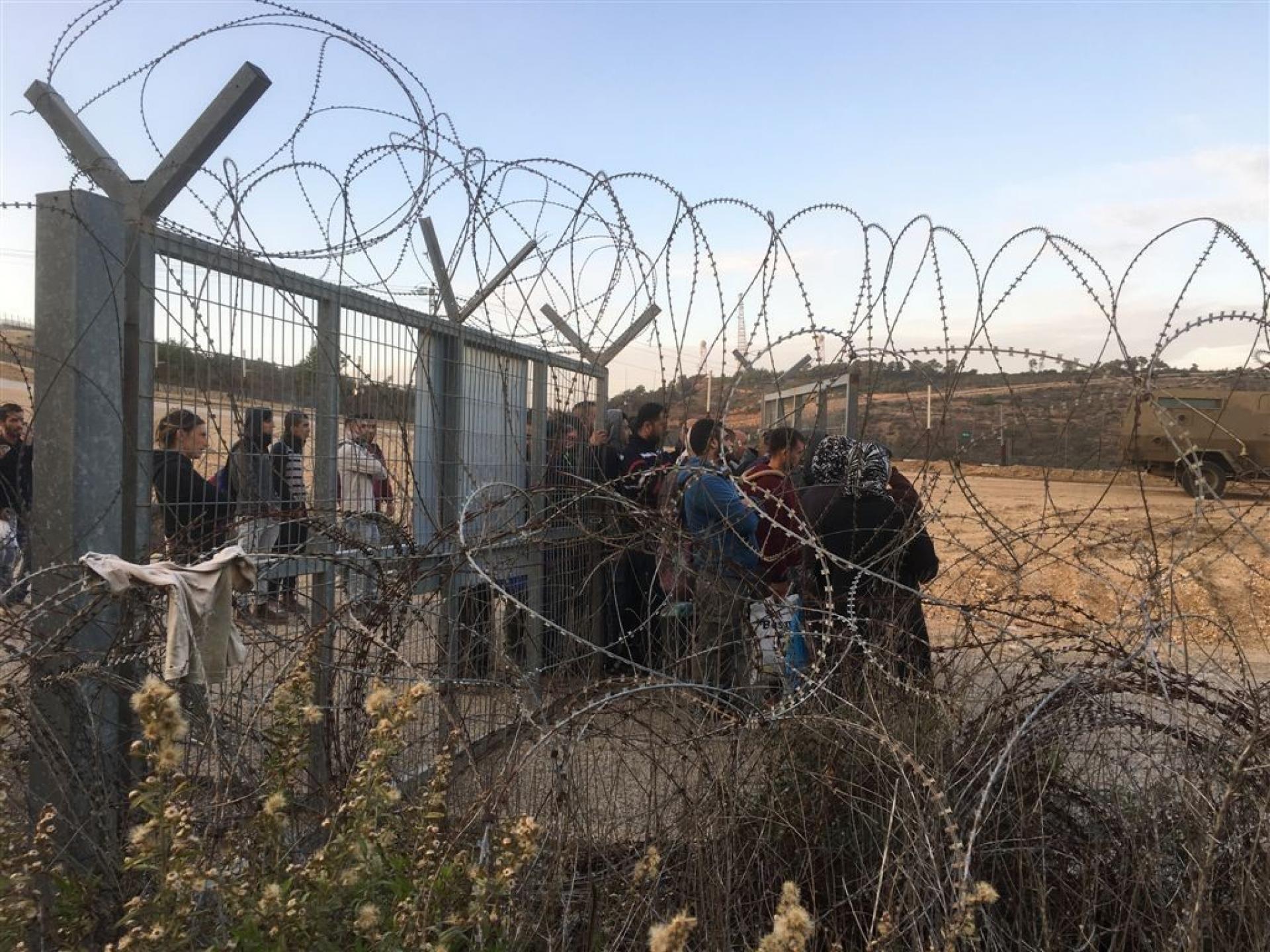 have been installed at various points along the separation barrier.  Most of these are open only once or twice a week, or by prior arrangement.  Some are permanently closed, and others are located far from the villages, far from the orchards and far from the fields.  As a result, crops are harmed, the farmers neglect their lands, and some are eventually totally abandoned. The regulations permitting passage have become more draconian than ever.  If your lands are not listed in the Land Registry Office, or if you don't possess some kind of document to show that the land that has been yours for generation is no longer accessible to you (and guess who will then ‘inherit’ the land?) And what if the original landowner has died?  Only his elderly widow or his firstborn son is eligible to receive a permit.  A distant relative or an unrecognized family member is always stopped.  Most probably, if you have the same last name as that of another landowner you will be prevented from receiving a permit to access your own land.  And, there is more.

During the olive harvest season, more people are allowed to cross but this leniency is a mockery.  For generations, the tradition in this agricultural culture has been that the entire family – from the newborn baby

to the most senior grandmother – all participate in the harvest and in harvest celebrations.  Then in came the separation fence and the checkpoints and out went the traditions, the customs, and the cultural heritage.

THE FASHION POLICE:  Recently we observed the implementation of new procedures:  Military Police officers have denied farmers who are too neatly dressed or those found with some cash in their pockets to cross over to their fields. The rationale is that they are not dressed properly for agricultural work.  The same happens at the Anin and Tayba-Rummana agricultural checkpoints, which are located within the Palestinian Authority area at the edge of Um El Fahem. 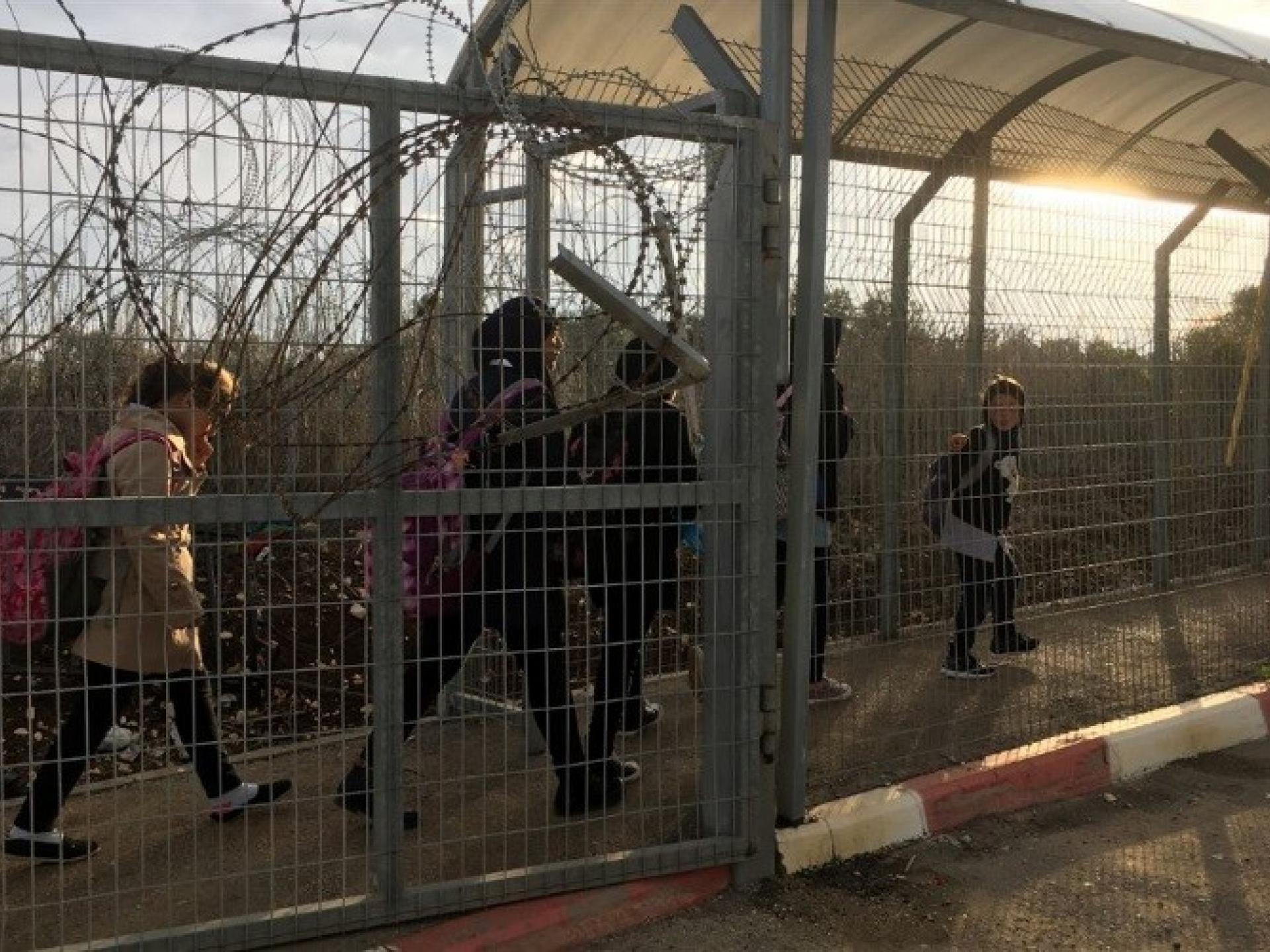 Getting to school means crossing a checkpoint
Photographer:
Ruti Tuval

The so-called “fabric of life” checkpoint next to the Palestinian village of Tura is proof that the authorities of the Occupation know that the fence disrupts the daily lives of Palestinians as far as their needs and customs.  Ironically, this “fabric” is made of threads that are too thin and is easily frayed.  Only a few are allowed to pass this checkpoint. Preschoolers and elementary school students whose school is in the territory of the Palestinian Authority must go through the checkpoint twice each day.  As they pass they are greeted by soldiers whose weapons are aimed at them and their little school bags are searched for explosives even when their journey is into the West Bank.

The Ya’abed-Dotan Checkpoint is located deep in the West Bank (see map) between the large town Y’abed and the settlement of Mevo Dotan.  This checkpoint monitors the passage from Jenin to the Barta’a Checkpoint and back.  The checkpoint includes a watchtower and cement barriers that obstruct the flow of traffic.

There is also a checkpoint that is almost a private checkpoint.  This is the checkpoint separating the east and a west side of the village of Baqa, which officially grants passage to eight families whose homes have been cut off by the fence and now makes them residents of Palestinian Baqa.

In our shifts, especially at the agricultural gates

, we are often approached by a father, a brother or a friend.  Each one tells a sad tale of another relative who is unable to cross and work in Israel, or someone who is unable to reach his land in the Seam Zone.  Another source of income gone, leaving more hungry mouths and more families despairing and despondent.  Another bureaucratic complication that cannot be allowed to continue. 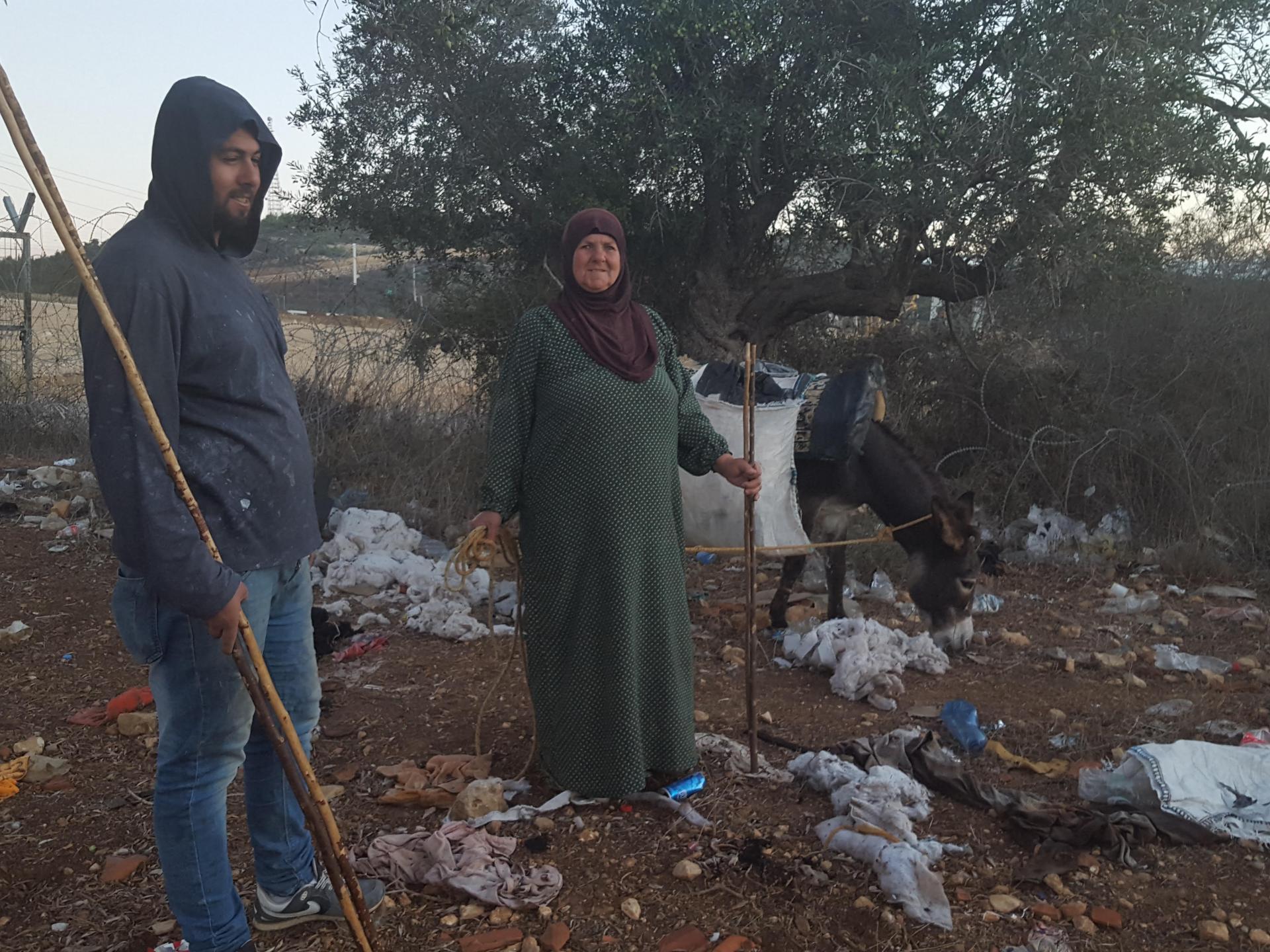 This year like last year during the olive harvest season, we met an elderly widow who was the sole member of her family given a permit to pass to the family’s orchard.  Each morning we saw her making her way with her donkey to the gate located quite a distance from her trees.  She headed down the steep slope to her land, located on the other side of the agricultural gate.  Several of us accompanied her down to the olive grove to help her harvest the crop.  Getting back presented a great challenge. 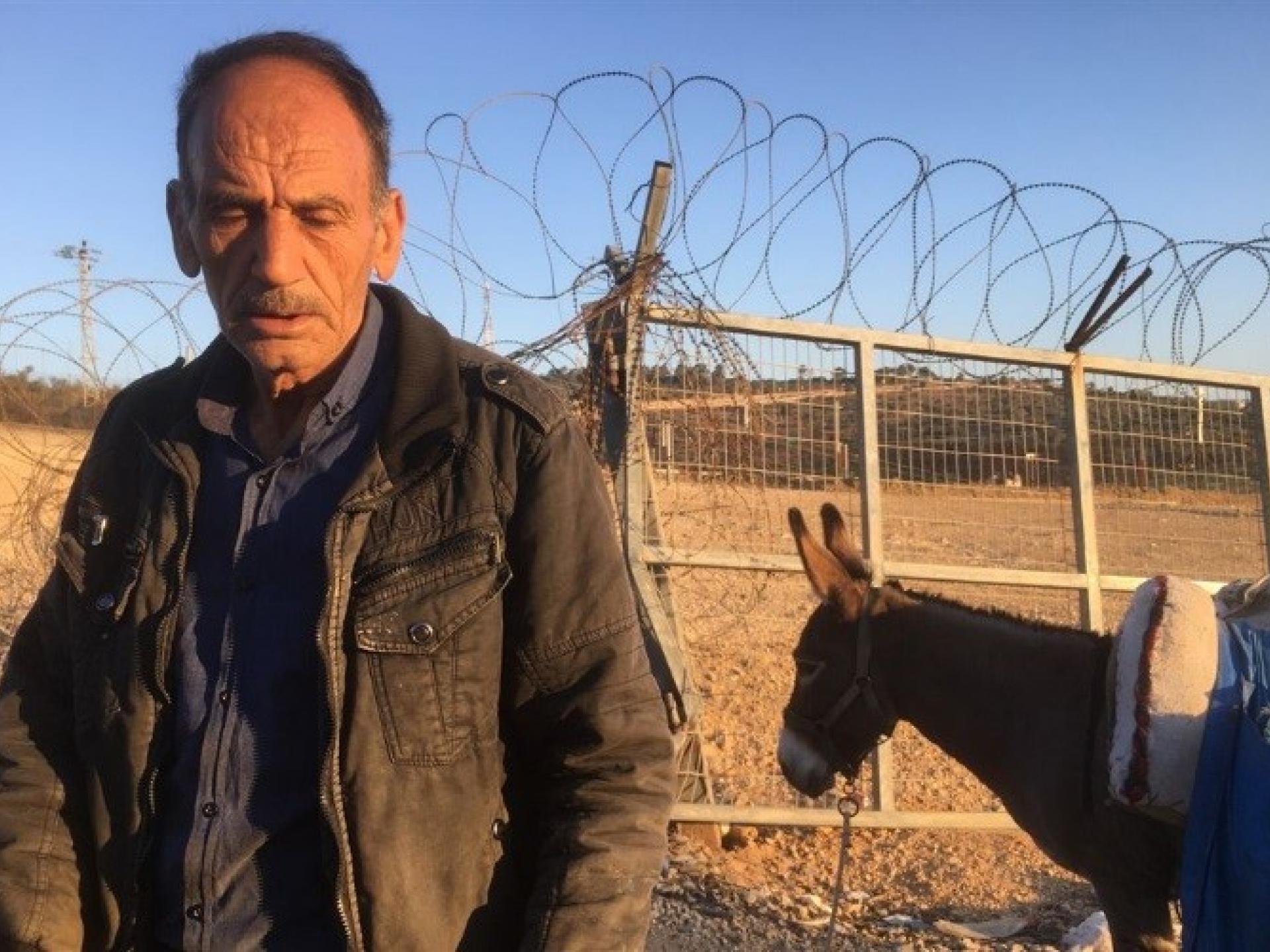 “Yesterday, the soldier told me to shut up when I asked him a question”
Photographer:
Ruti Tuval

As we have described here, today’s checkpoints are very much improved.  They contain endless electronic monitoring devices; information about every Palestinian is pulled easily from laptop computers.  The soldiers no longer need to struggle with elementary Arabic (give, take, backup, lift up, lower, outta here…).  Palestinians have learned to read body language and the signs of dismissal.  The checkpoints are efficient and the same two groups, who continue to populate its premises - the soldiers and the Palestinians - hardly communicate.  An investment has been made to make the checkpoints “look good” and it all seems efficient and productive, but only for those who ignore the bitter truth.   With each passing day, the Occupation becomes less humane, crueler, and frightfully bureaucratic. 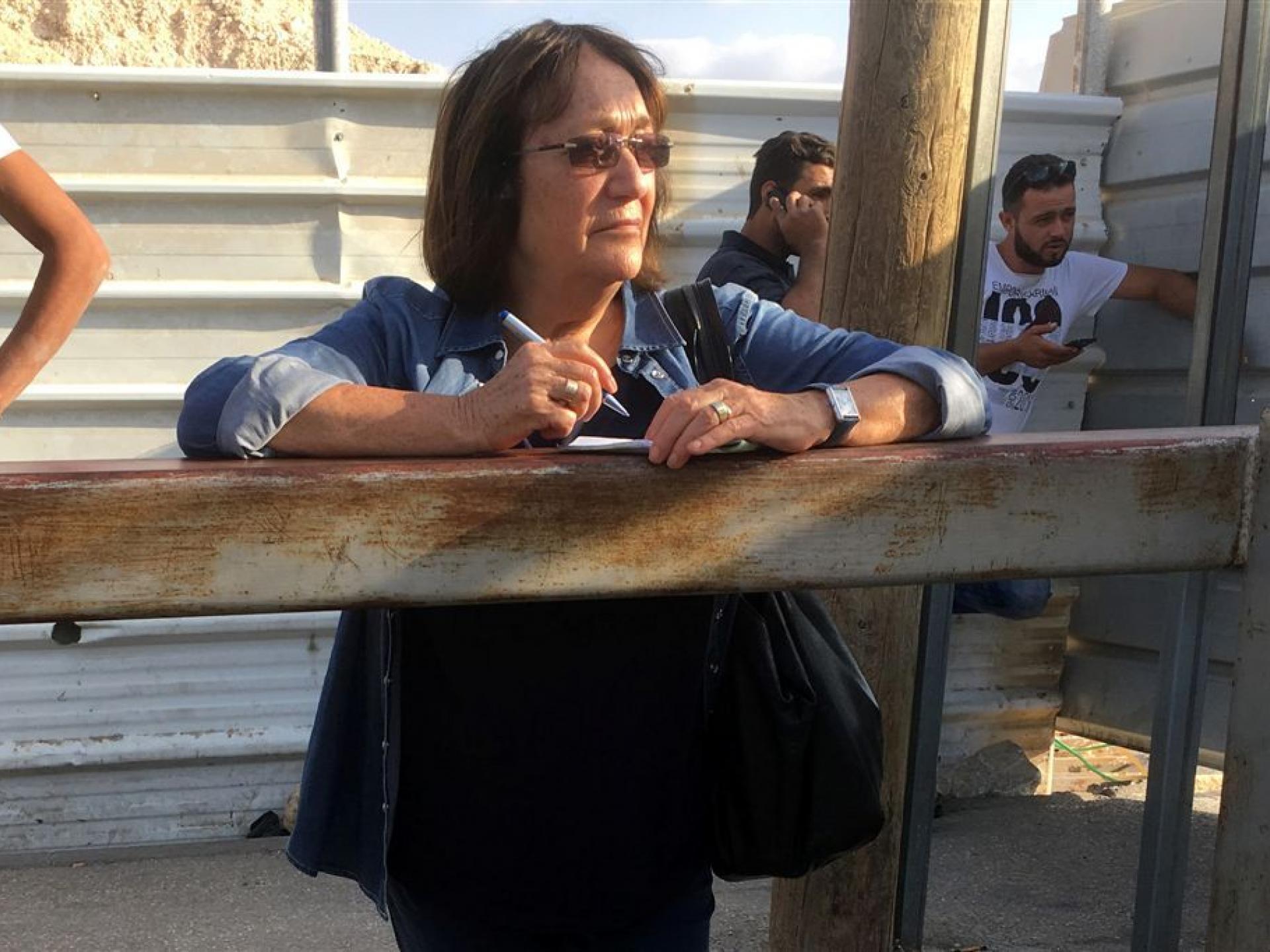 Our constant and determined presence at these points of friction between the military and Palestinian civilians is but a small shimmering candle representing sanity and comradeship between members of the human race. Documenting what we see and hear is our way of showing the Palestinians that there are Israelis who are attentive to their fate.  This is our way of protesting the Occupation.