A Short Guide to the Bureaucracy of the Occupation 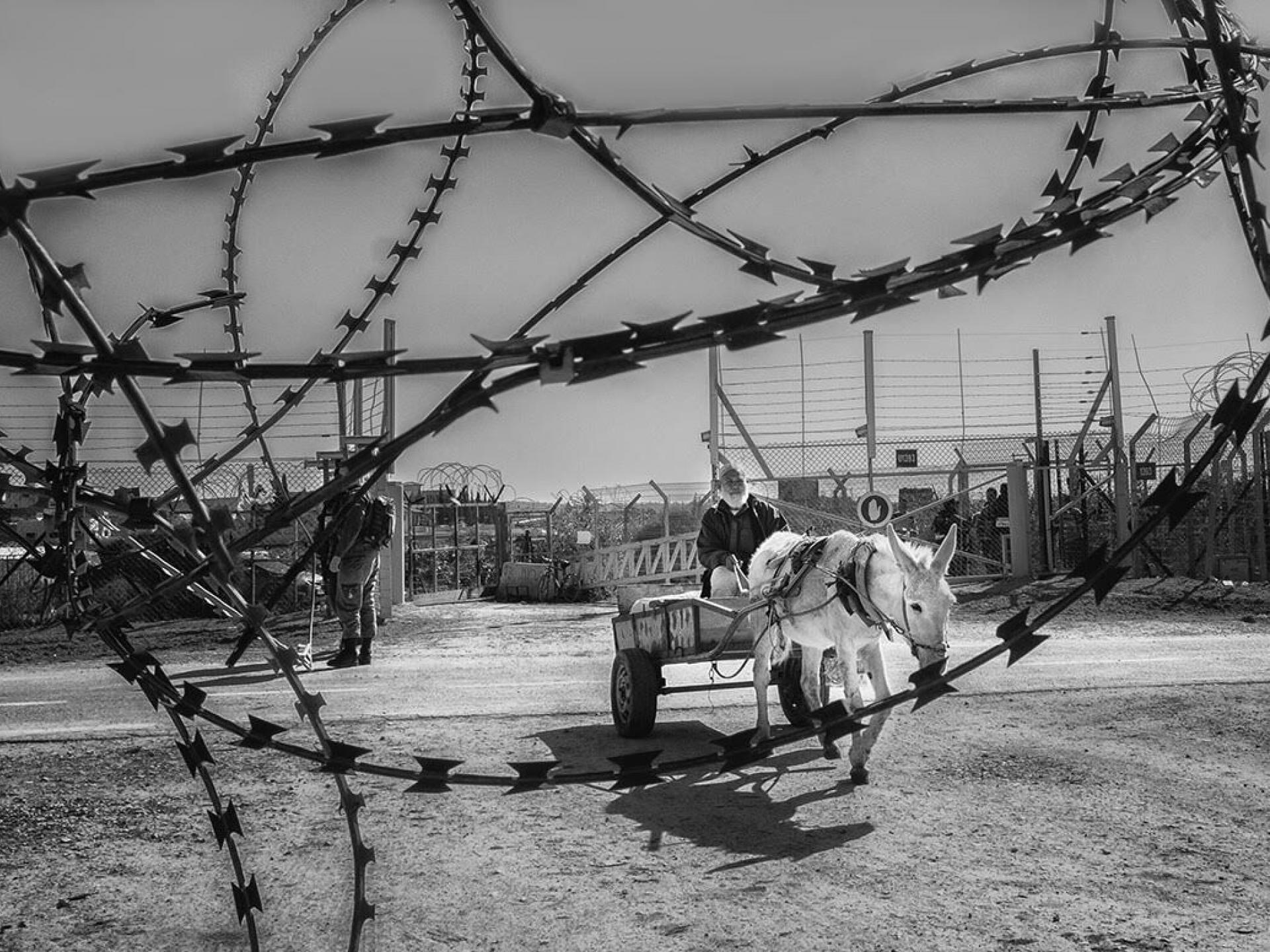 In 2003 we discovered a new term in Civil Administration publications – the Seam Zone (also known as the Seamline Zone). The word seam was familiar from the Jerusalem area where it is used. We learned rather quickly that these two seam were as far from each other as east from west. And then complaints began to stream in - severe problems concerning life and work in that space.

We wonder how many people really know what the Seam Zone is. Surely, even most of those who think they know, don’t really know everything. It is difficult to grasp its complicated essence; even the State of Israel has yet to decide, because, actually it’s a kind of hybrid.  Yes, it is Palestinian, but not really.  Is it a closed military zone?  Is it open to any Israeli wanting to visit?  What is the rule of law; is it Israeli, Palestinian or military?  Who lives there?  Settlers, Palestinians, Palestinians with special permits who are allowed to sleep in their own home?

Indeed!  All the answers are correct.

What is the Seam Zone?

In early October 2003 the Chief of Israel’s Central Command declared all of the space between the Separation Fence in the north and center of the West Bank, and the Green Line (1949 armistice line and internationally recognized border) as a closed military zone until further notice. The route of the Green Line and that of the Separation Fence is not identical and does not overlap as might have been expected and desired. In between them is the area now known as the Seam Zone.  These areas,  closed off to Palestinians, are in fact an integral  part of the West Bank. Since 2003,  a draconian permit system has been implemented which today includes all the areas between the Separation Fence and the Green Line (from the north to the south of the West Bank, including the area of Hebron wherever the separation barrier has been constructed).    The military has declared these areas as closed to Palestinians.  In actual fact, this means that every Palestinian who resides in these areas or who needs to enter these areas is required to receive a permit from the army in order to do so.  This permit system applies only to Palestinians.   People of all other nationalities such as Israelis and tourists from every part of the world, are allowed to enter and reside in the Seam Zone. Israeli military law is applied to the Palestinians but Israeli law applies to the Israelis and tourists who are in the area.

It is important to note that the area identified by Israel as the Seam Zone is  an occupied area.   Even Israel considers this a conflict area and so it is administered by the military. Israel avoids placing the Seam Zone under Israeli law or giving its residents a legal status as Israelis.

For Palestinians, this is a closed military zone.

The Seam Zone contains 29 settlements, outposts and industrial zones, as well as 12 caged Palestinian villages. Palestinian villagers are issued special permits allowing them to stay in their own homes. They are not allowed to sleep at home without such permits. 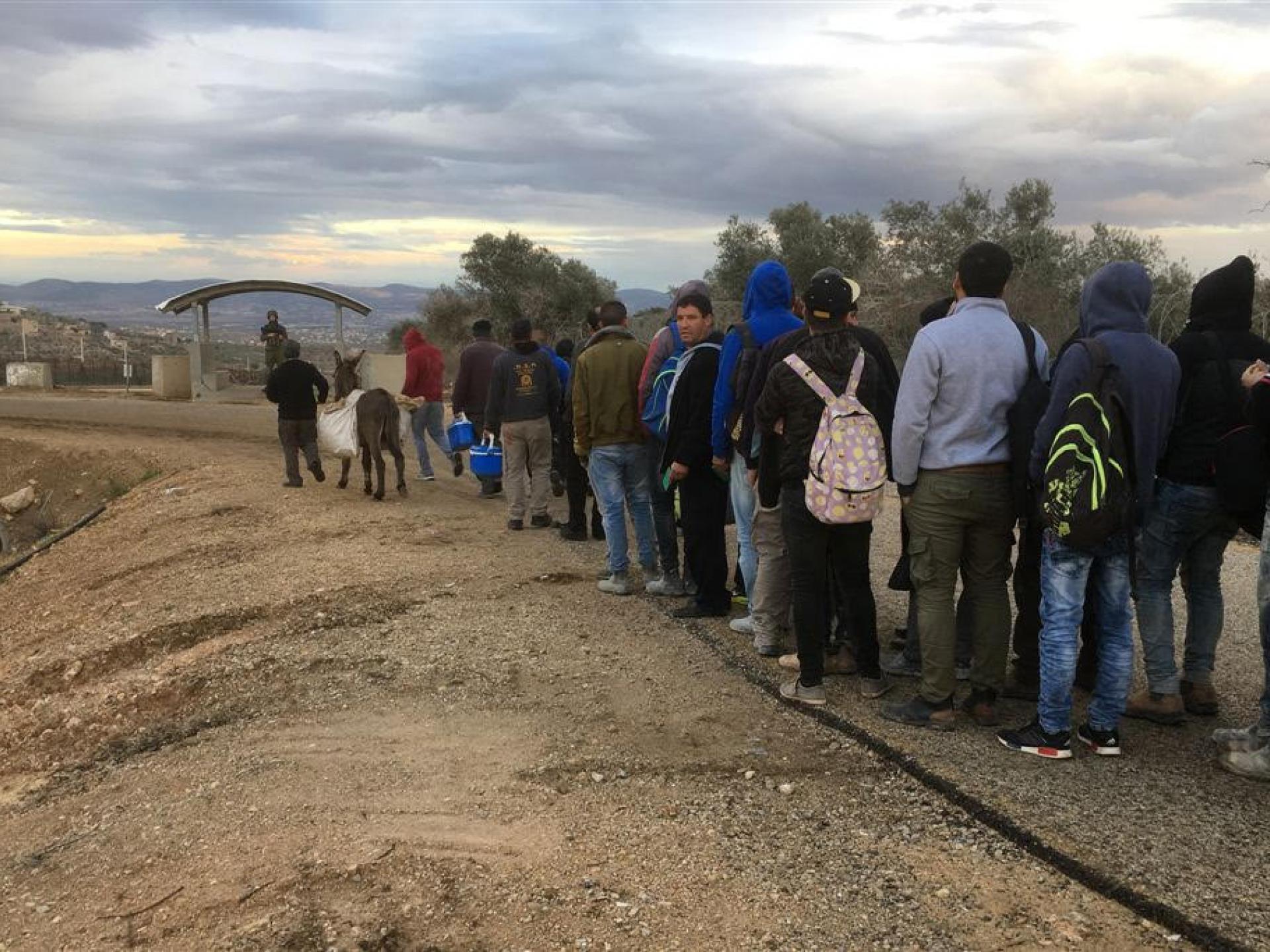 Permits to enter the Seam Zone are not easily issued, and not to everyone – neither to those living in it, nor to those Palestinians who do not actually live there but own lands there.  Fifteen  types of permits are issued to Palestinians.  Here are some of the permits issued:

A person holding one type of permit is not allowed into the Seam Zone holding any of the other types of permits.

This complicated bureaucratic apparatus, that supposedly regulates access to the lands trapped inside the Seam Zone, drastically reduces the ability of farmers to cultivate farmlands and causes severe economic losses to farmers and business owners there. The result is irreversible damage to customs and the fiber of life that has been maintained in the region for generations.

How are land-owning Palestinians kept from cultivating their lands?

Anyone owning land inside the Seam Zone while residing outside it needs a special access permit issued at the army’s DCO (District Coordinating Offices).

And who is eligible for such a permit? Only landowners under whose name the land is officially registered. Recently, laws were changed and individuals who possess wills and proof of inheritance will no longer be recognized as the official landowners.  They will have to go through a complex and expensive process in order to change title of the land.   And what if the land is registered to an elderly couple who is no longer able to work in their field, or olive grove, or greenhouses? Still, only they will be issued such permits! Even if they have young sons who are willing and able to work the land – the latter will not receive the necessary permits. Why? So as not to have them cultivate the land, and after three years of non-cultivation – it will become ‘state land’. 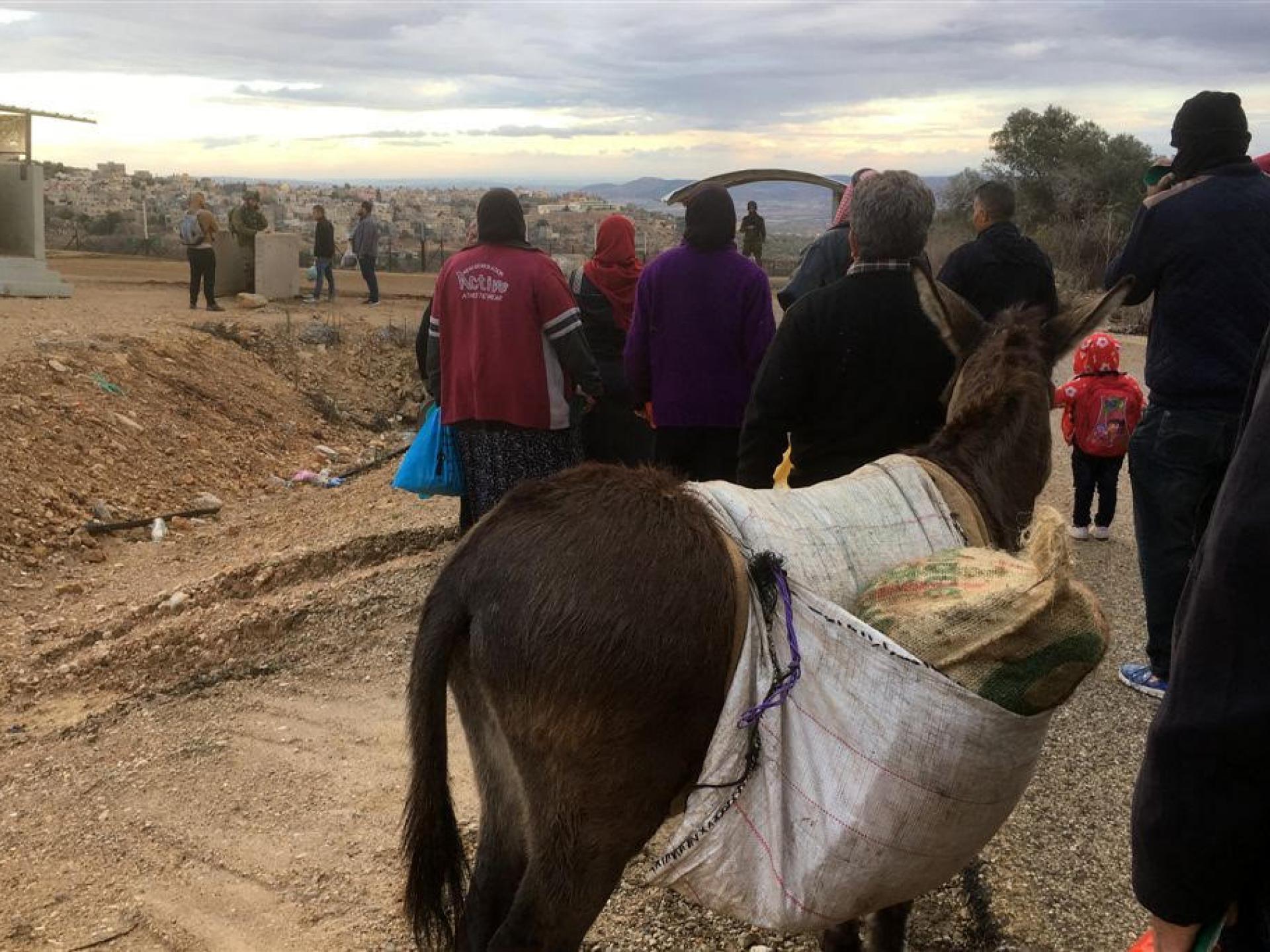 Moreover, entrance into the Seam Zone is through military checkpoints known as agricultural gates

in official Israeli jargon. These are opened twice or three times a day, at the army’s convenience, not necessarily complying with the farmers’ work schedule. For example, in the summer farmers wish to access their fields in the pre-dawn hours, before the extreme heat of the day begins. But the gates are opened between 6 and 7 am. By the time the landowner gets to his field from the checkpoint, the sun is already beating down in full force. In the evening, he must be back at the gate before closing time, or else be considered an illegal alien and lose his permit. But what if a water pipe has broken, or the tractor needs urgent repair? Tough luck… 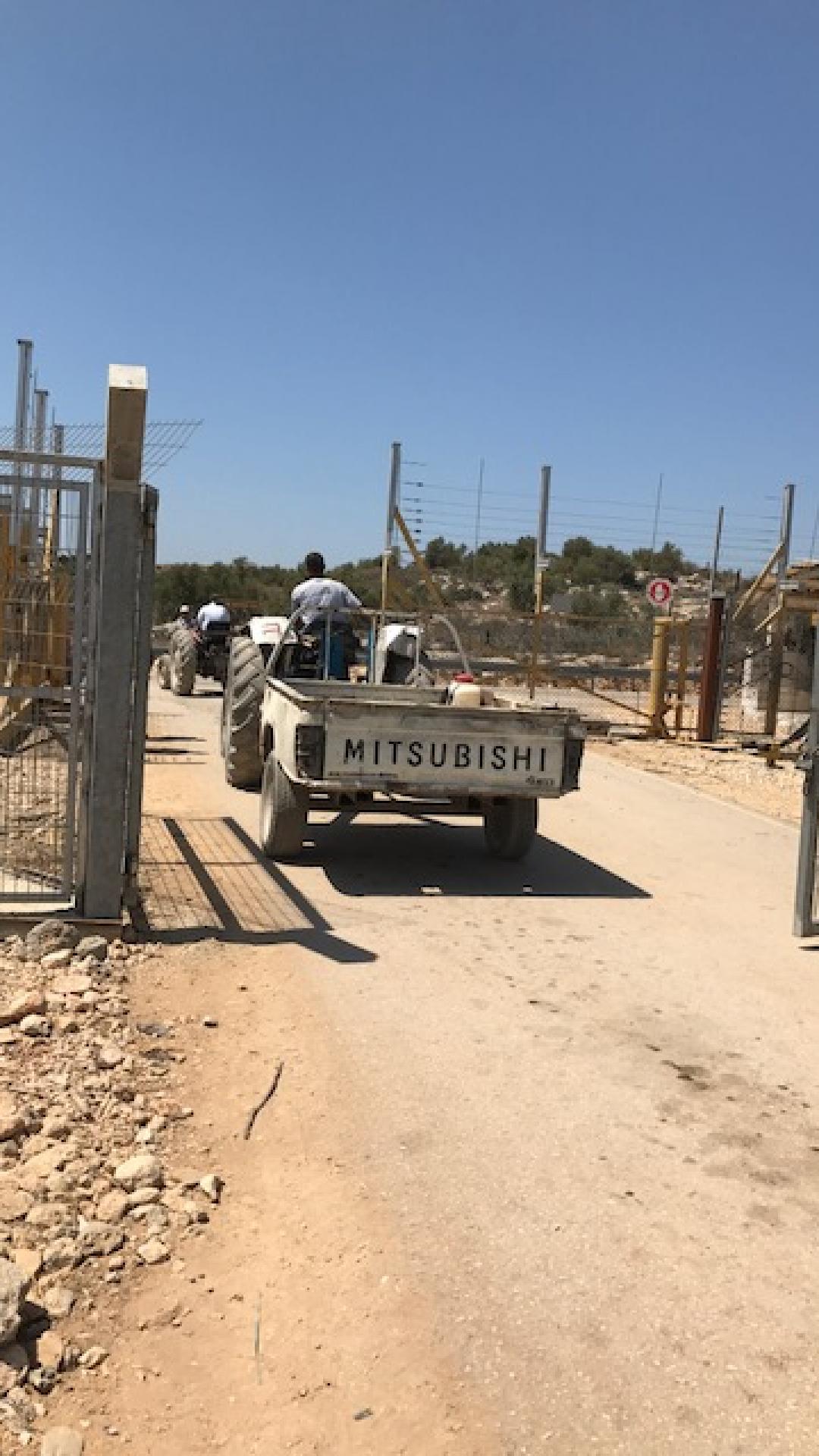 are opened only twice a year – during the olive harvest and at plowing season, and only for a few days each time, at the army’s discretion. This does not allow the farmer to carry out vital tasks in the field. Why these restrictions?

In many places, the location of the gate requires the Palestinians to travel a long distance usually on rough, unpaved roads. The difficulties in accessing the lands, and the expense of doing so, turn farming into a non-lucrative, Sisyphean task, and many Palestinians have given up trying to gain access their land, thereby losing their main source of livelihood.  In this way their rights to the land are taken from them and the land becomes… state land.

Such are the wonders of the Seam Zone.

What do we do?

We, volunteers of Machsomwatch, are struggling against the abusive procedures of the ‘permit regime’ and attempt to do everything in our power to uphold the rights of the Seam Zone villagers so that they can maintain their everyday routine.

The instructions publicized by the Civil Administration regarding the Seam Zone are unintelligible hieroglyphics that enable any soldier or officer to give Palestinian wishing to travel in the Seam Zone the royal runaround– come and go, come and go, bring documents and more documents, and always new demands made on them, with the sole purpose of stealing the Seam Zone agricultural lands and expelling as many villagers as possible. Bureaucracy disguises this true purpose which is to distract the inhabitants whose entire attention is given to this paper-chase, while their land is being stolen from under their own eyes.  Recently, in order to help make the complex rules and regulations more understandable, and in order to help make the system a little more penetrable, we issued a guide to the shepherd in the Seam Zone in the hope of easing the challenges that farmers face in the constant race for the correct permit.

Will we manage to save the Seam Zone from annexation by Israel and from expulsion of its Palestinian inhabitants? Probably not, but we are familiar with the procedures and try to help these inhabitants cope and attempt to get beyond these challenges.