To go to our lands, to the trees planted by previous generations | Machsomwatch
Skip to main content

To go to our lands, to the trees planted by previous generations 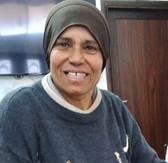 UMM MOUSSA, DOHA (ضحى) lives in the village of Burin in the northern West Bank.  Doha is part of one of the large families that has lived in the village for generations. She is a married mother of three. A zealous farmer, she organizes women’s activities and hosts international volunteers. She is the contact person for MachsomWatch with everything happening around her.

I DREAM OF PEACE

I dream of peace. Without the inhuman settlers who stand above, over there, and disrupt our lives. I dream of living every single day without discovering an additional harm they inflict upon us. I pray for us to be free. I dream of being able to drive wherever we wish, to go out to our lands – plow, weed, harvest in our own time. Without someone else ordering us and handing out certain days for working and harvesting.

At present, there is a certain coordination between the Palestinian Authority and the Israeli Administration – but even after we already have a permit, they still follow us. Why should we have to coordinate for permission to go to our own field? It is painful and humiliating.

When I see people happy, free, not persecuted by others, I think; why can’t we too live like human beings? We all have families and children, both sides, we and the Israelis. Why kill? We could live in peace and security and work our land. In freedom. Without occupation. 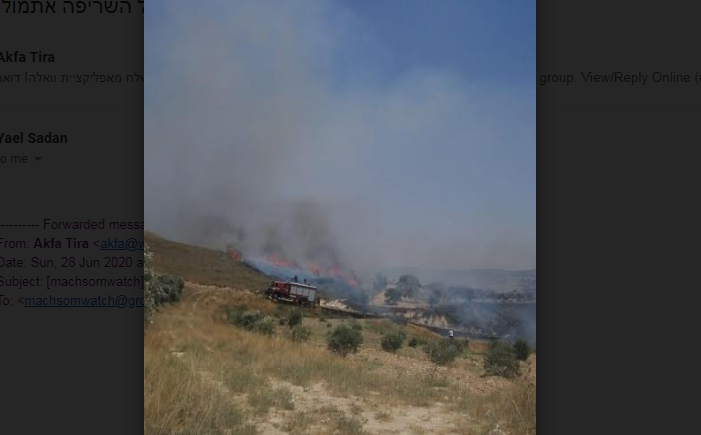 The one memory I will never forget is the 1967 war. I was a little girl. My mother said, “Let’s sleep under the tree.” “Why?” I asked. “Because the Jews have occupied our village and there are airplanes at night that might attack the houses.” I remember that at night, we spread our mattresses under the olive trees about 100 meters from the house, and it was terribly frightening.

I also remember that on the first day of the war, June 5, 1967, the Jews killed my father. He was a police officer in the Jordanian police and worked around Bitunya. We were not allowed to bury him for 3 months. I’ll never forget this. It was very difficult. To this day, Israel holds on to bodies and does not release them immediately for burial.

I was five years old, the second of four children (2, 3, 5 and 6 years old). We lost our father, and our mother, a widow at 28, had to work hard for strangers in order to survive, working in the fields, cleaning and such. However, we were honored as a bereaved family. I was an angry and sad child. From the age of nine, I accompanied my mother to her work in the fields. I remember us as children carrying heavy loads on our heads along with our mother. That was how I got used to working in the field.

I met my husband Samir in high school; we were in the same class. We fell in love. We are related. I knew from the start that life with him would be as free as I wished. For 13 years I couldn’t have children. I miscarried, and after fertility treatments I had twins, and now I have 3 children. The eldest is finishing up her Hebrew and English studies at Al Najah University in Nablus. The youngest is graduating from high school. My husband is a high school teacher. During the long years when we couldn’t have children, I suggested he marry another woman, but he promised he would stay with me forever. He lets me have my space and understands me. He never prevents me from realizing my wishes.

I AM SAID TO BE A STRONG WOMAN, A LEADER

I got my strength from growing up without a father, with a surviving mother.

I organize trips for the women in Burin and its surroundings, to holy sites, especially to Al Aqsa, to Hebron, at times even to Akko and Haifa. My home is always open, and every year I host about 20 young people from all over the world who come for the olive harvest and stay in Burin. When they come, I set out an endless table with traditional Palestinian delicacies, made mostly out of Palestinian farm produce. A participant from Italy invited me to a slow food conference in Italy. I have already gone there twice, to demonstrate the preparation of Palestinian food. 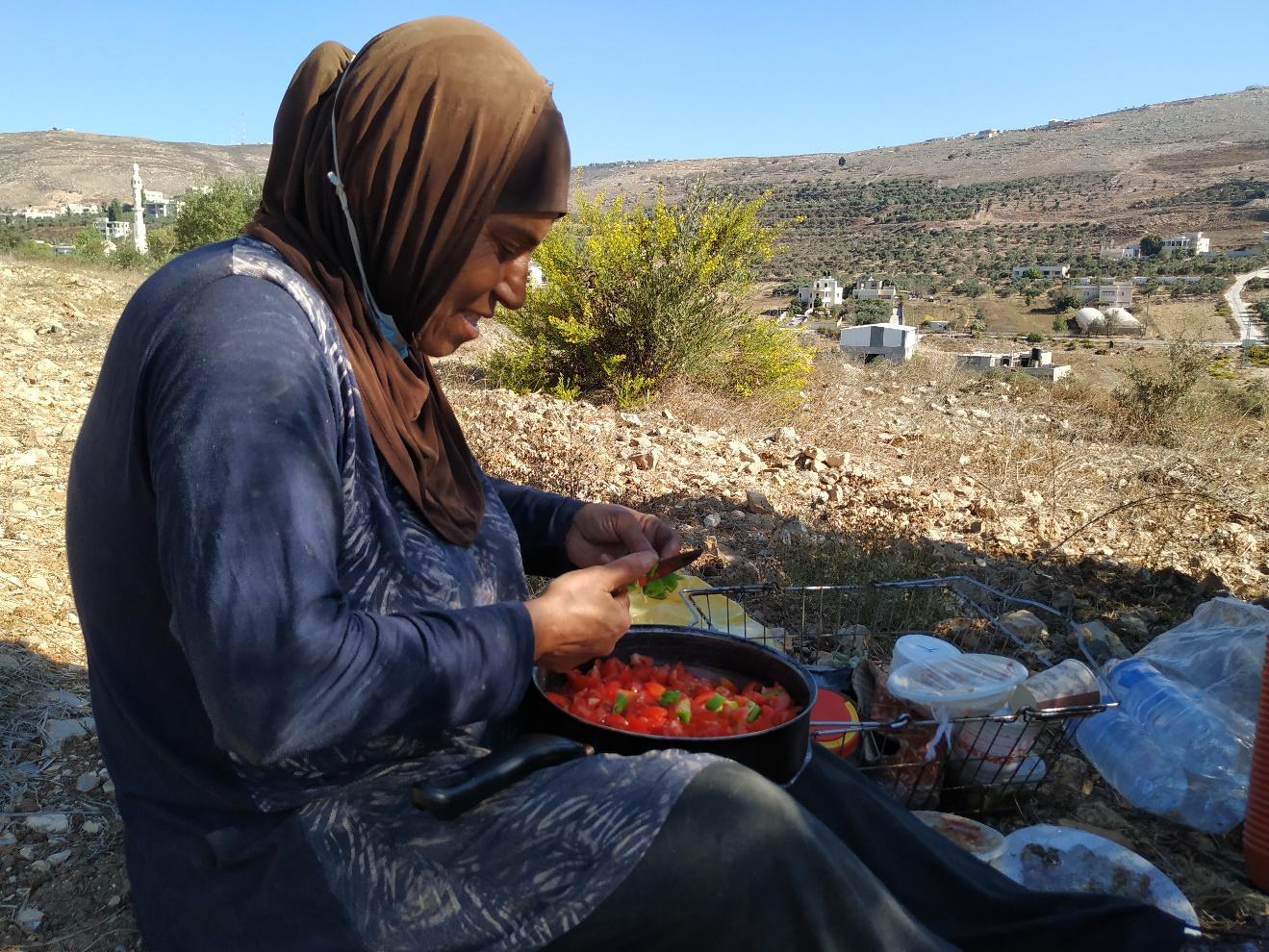 I came to one of the Sea Days, and that is where I changed concerning Jews. The encounter with peace-seeking Israelis opened my mind. Ever since then I am in touch with MachsomWatch members, and organize groups for the Sea Days. I am always happy to meet the MachsomWatch women and am interested in having Burin women meet Israeli women from peace organizations, so they can begin to know a variety of Israelis and undergo the same change I experienced.

Tomorrow, I want to go to our lands, to the trees planted by previous generations, and pick olives.

* Special thanks to Amira, Riki, Gili, Tali and Naomi, the dear Sea Days women who  contributed to the writing of this profile

Please send us an email (friendsofmachsomwatch@gmail.com) with your name and phone number if you are interested in joining us for a visit and lunch with Doha in Burin.We will be in touch as soon as we set a date for this visit. 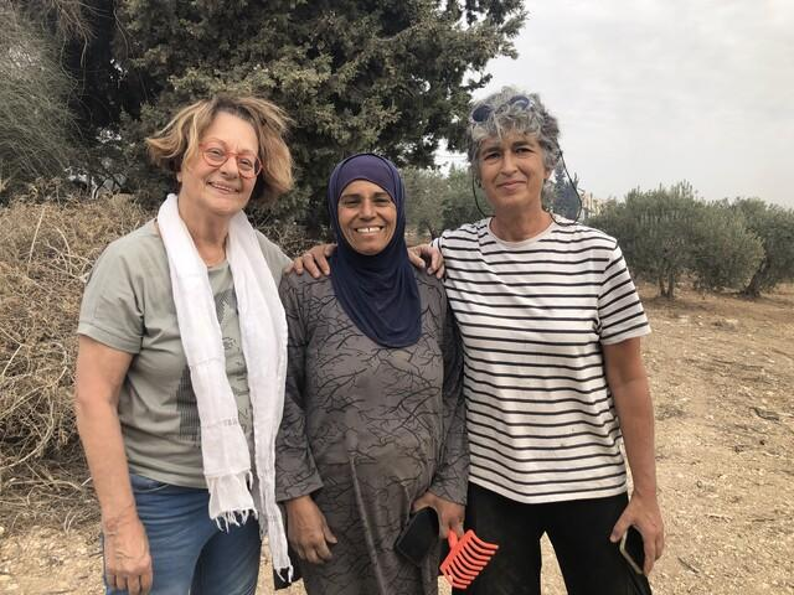