An Excursion of a Different Kind: Irit Segoli | Machsomwatch
Skip to main content

An Excursion of a Different Kind: Irit Segoli

Without a doubt, monitoring and observing checkpoint crossings, agricultural gates

and other barriers - be they permanent or temporary, provide an in depth look at humiliating experiences which impact the daily lives of Palestinians.  For most Israelis, checkpoints are viewed as necessary for enhancing their security. It is hard, if not impossible to refute this false sense of security while pointing out the damages inflicted by the checkpoints to the Palestinian as well as to the Israeli societies.

Checkpoints, gates and other barriers are only one of many ways of controlling, oppressing and dispossessing an entire population.  There are others ways which are less obvious but just as effective.  These mechanisms are often hidden from our field of vision while most of the energy and attention is directed at the checkpoints and barriers. This appears to be a convenient and effective tactic that succeeds in capturing the attention of Palestinians, the media and all of us as the Occupation’s most visible mechanism of control. At the same time, other oppressive actions operate unnoticed, unmonitored and unreported and left to the creativity of the settlers, the army and all the arms of the Occupation.

During our so called excursions, our team has learned about the ways restricted access to Palestinian cultural heritage sites serves as a means to suppress and erase historical and cultural identity in rural areas.  Over and over, we encounter two hidden ways that the Occupation uses to take control without erecting a single fence or barrier.

And this is what actually happens:

• The army monitors and controls Palestinian agricultural land without fences or agricultural gates.  Farmers know exactly which areas of their own land to steer clear of in order to avoid the risk of being shot at by soldiers.

•Declaring areas of land as nature reserves and implementing laws that prohibit agricultural activity in nature reserves are a cunning and sophisticated way to occupy land.  Learning more about this tactic is urgent and critical.

During a visit to the village of Far'ata in March 2018, Awad Tawil showed us exactly where a farmer needing to reach his olive trees would be risking his life. 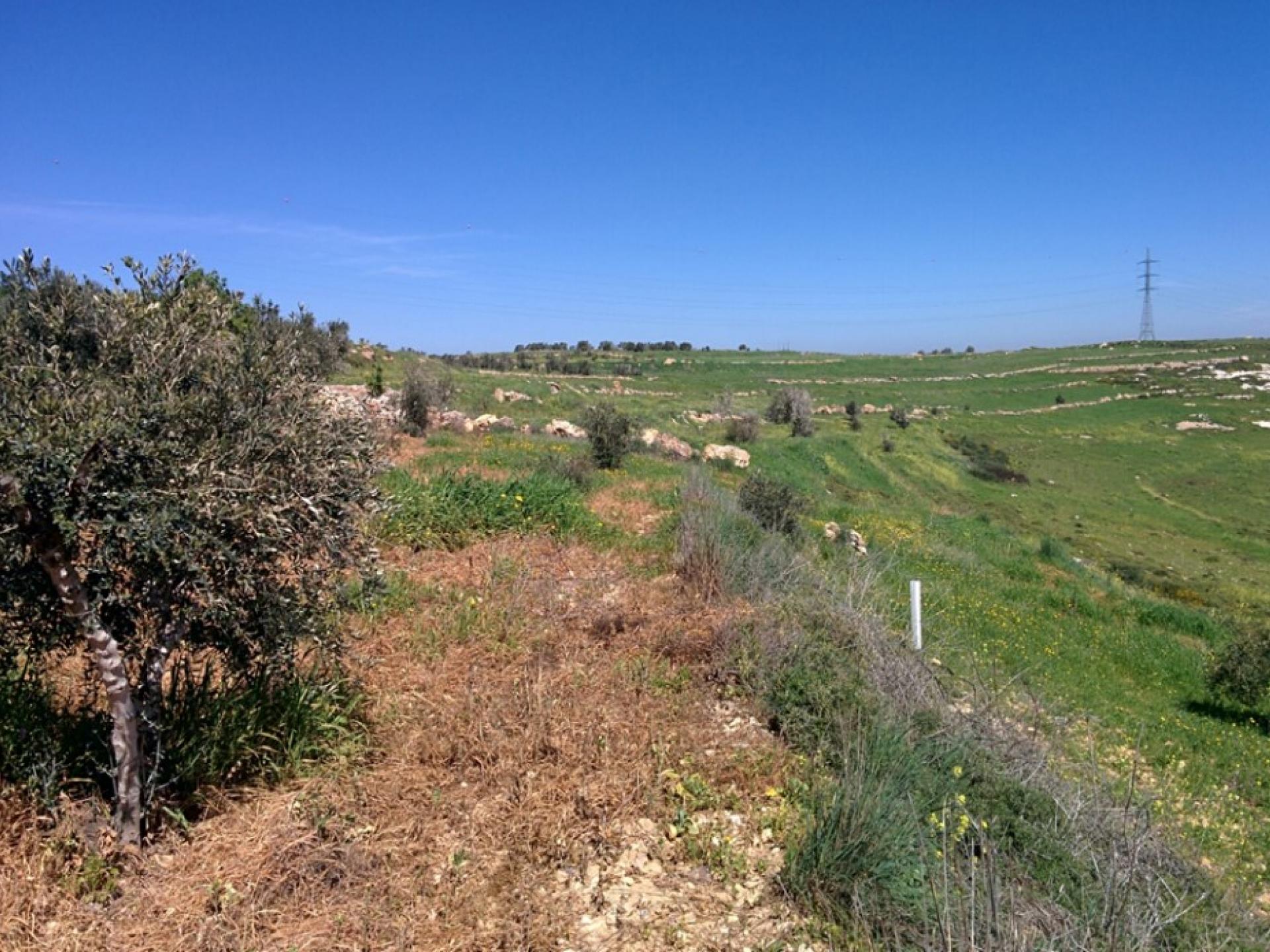 In the distant grove in the above photo the army sits and overlooks the farmers of the village of Far'ata. "For two years now, I have not dared to get to my land, which is monitored from that hilltop," said Awad Twail. Six years ago, he was caught in his fields by a soldier who ordered Awad to sit on the ground.  The soldier then instructed the settler who was with him to, "let him have a stone in his head." And so the settler did just that.

It is very possible that recent violent actions by the settlers of Yitzhar, Givat Ronen and Sneh Ya’akov (including attacks on the Palestinian village Burin) will lead to additional military observation posts on Palestinian lands.  This would effectively limit and / or bar agricultural access under the guise of security concerns.

The Yitzhar settlement located on the Jebel Salman summit is one such large observation post. On one of our recent shifts a farmer from Madama showed us the spot where Yitzhar settlers beat his son with a metal rod as the boy tried to prevent the settlers from damaging young olive trees.

In early March 2018, Spring Day was celebrated under heavy security, in the Wadi Qana Nature Reserve (photo below).  This nature reserve is actually located on agricultural land belonging to residents of several Palestinian villages, including Deir Istiya and Bani Hassan.  Busloads of children arrived from settlements throughout the West Bank to the Spring Day ceremonies in Wadi Kana.  This valley is surrounded by settlements.  Land grabs have taken Palestinian lands for construction and for building access roads from the settlements directly into the valley. 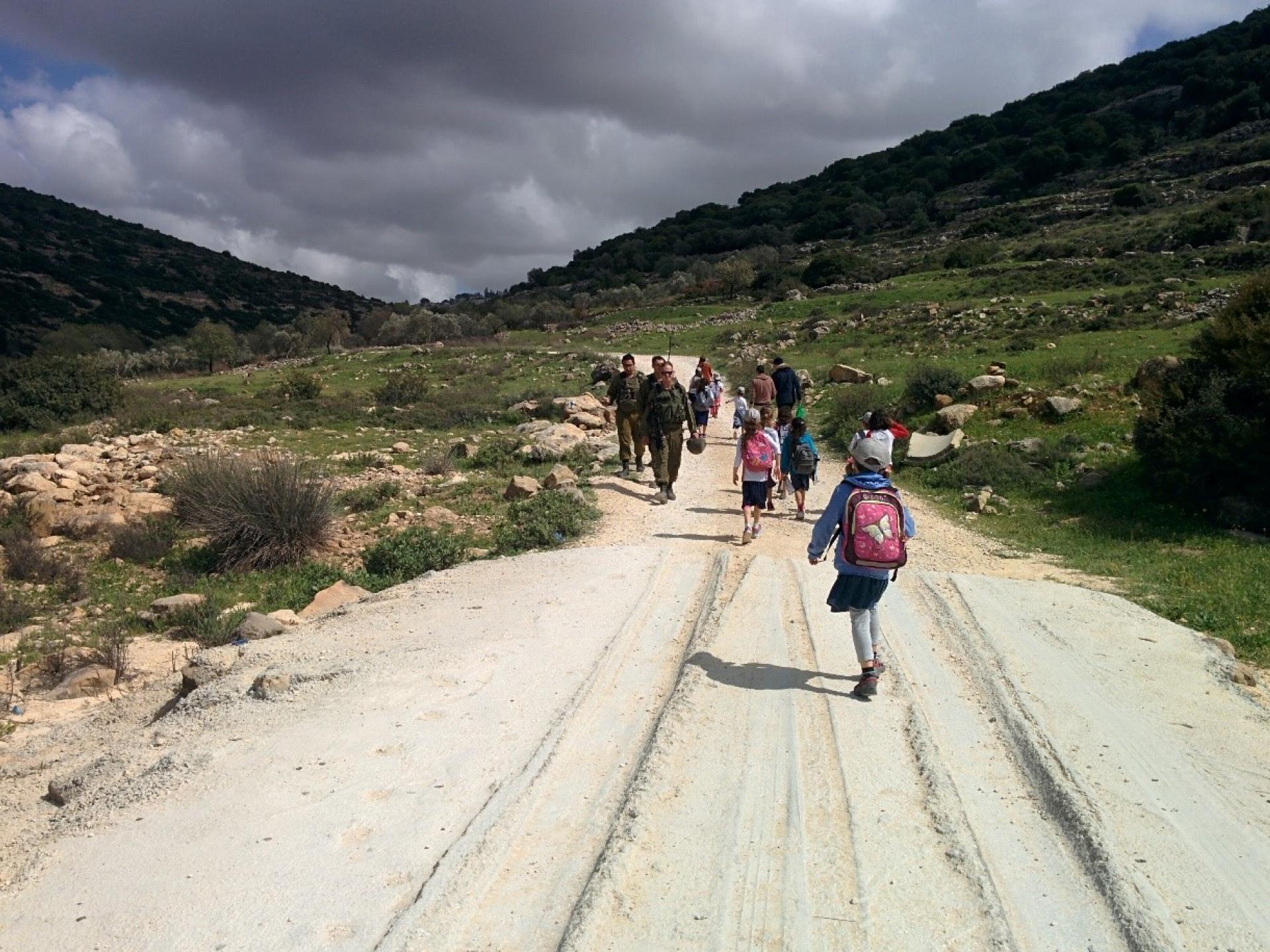 The Wadi Kana area was declared a nature reserve in the early 1980s. But only 30 years later the nature reserve laws started to be implemented.  These restrictions include the prohibition of planting new trees to replace dead ones, restrictions on restoration of land terraces, and more. It is clear that when a fruit tree dies, and the owner of the land is forbidden from planting a new tree, the path of deterioration of the agricultural area begins and the farmer's livelihood is threatened. Palestinians are still allowed to travel in the Wadi Kana Reserve, but their ability to farm is shrinking

Planning for additional reserves throughout the West Bank is in the works.  There are hints that regulations prohibiting construction in nature reserves will be bypassed.  We see this happening regularly.

As an example are two declared nature reserves surrounding the settlement of Halamish and Umm Safa.  One nature reserve is known as the Deir Nizam Forest.  Land for constructing houses for a settlement, for construction of a sewage purification plant and a fenced in olive grove was taken from this nature reserve.  The Umm Safa Forest Reserve (or Halamish Reserve), was created from private land and olive groves belonging to the family of Nabi Saleh.

For almost two years our team has been researching, photographing, filming and documenting restricted access to Muslim prayer sites.  We have identified 35 restricted sites, which are holy to Palestinians throughout the West Bank. Many of these sites are located in nature reserves, 8 of them are located inside settlements or are controlled by the settlements.  To put things in perspective we imagine a synagogue located in a nature reserve in the heart of a Palestinian village where Jews would be denied access.

Our survey includes testimonies from Palestinians describing traditional practices and sharing the pain of being unable to visit their holy sites, we also include  maps and photographs from the present and the past.  The survey has been turned over to Adv. Neta Amar who is reviewing the information from a legal perspective as it relates to international conventions, which deal with the violation of human rights, and the rights of occupied people to access and to protect their heritage sites.

The report will be posted on the MachsomWatch website where it can be updated regularly.

FROM THE CHECKPOINT TO OPEN SPACES

Two years ago, when we came to the checkpoint at the Nabi Saleh village, we found the checkpoint shut. Naji Tamimi (today the head of the village) came out and we asked him about the checkpoint. He raised his hands in the air and said, "Nu, how much can we talk about this checkpoint?"

He invited us to join him on an excursion. We entered the Umm Safa and Deir Nizam Nature Reserves. Naji pointed out the settlement of Halamish, its sewage plant and the olive grove establish by the settlers right in the Deir Nizam Nature Reserve. He told us about the Hovlata Antiquities Site where as a child he learned to swim in the water cistern adjacent to the site. Today, he is unable to go there as it is located in the heart of the Halamish Settlement.  We walked to the spring of Ein Kus (known as the Rainbow Spring), now renamed by the Occupation as Meir Spring.  We climbed up to the Tivna Antiquities Site and the burial caves at the entrance to the Dir Nizam village.

Since that first excursion, we  share Naji Tamimi’s vision for Nabi Saleh’s ancient sites and turning them to a place for the community and its children with a focus on environment, Palestinian history and archeology, in order to teach them that Palestinian history doesn’t begin nor does it end with the Israeli Occupation.