Collective Blacklisting as a Tool of Deterrence

Collective Blacklisting as a Tool of Deterrence

Thousands of Palestinians have lost their ability to earn a living in the last two years.  This is due to the fact that their family name is identical to that of one individual who took part in what is known as the Lone Terrorist Intifada.  The fact is that most of those who have been blacklisted are not related to nor have any personal ties to the attacker. This arbitrary measure can only be viewed as collective punishment under the guise of deterrence.

Two powerful tools make it possible to control human beings – military superiority and bureaucracy. We deal with the bureaucracy of the Occupation, a regime requiring that a special permit be issued by the authorities for every single aspect of a person’s life – from birth to education, from employment to marriage, from illness to death.  A permit for every move, for every need and for every one of life’s necessities is imposed by the authorities on individual human beings.

The West Bank is divided into hundreds of areas blocked and cordoned off by walls, by fences, by apartheid roads, as well as by orders issued by the Israeli army’s Civil Administration.  Palestinians are required to hold permits for nearly every single move and activity they undertake.  The set of complex rules belong to the Civil Administration and change constantly.    Our website offers a full description of the  bureaucracy of the occupation.

Those who are blacklisted are denied a permit for movement into certain areas, (such as Jerusalem which is the central city for Palestinians), or into Israel for livelihood and work, are blacklisted.  They are blacklisted by the General Security Services (Shabak) or the Police or by the Civil Administration which is the operations branch of the Ministry of Defense. 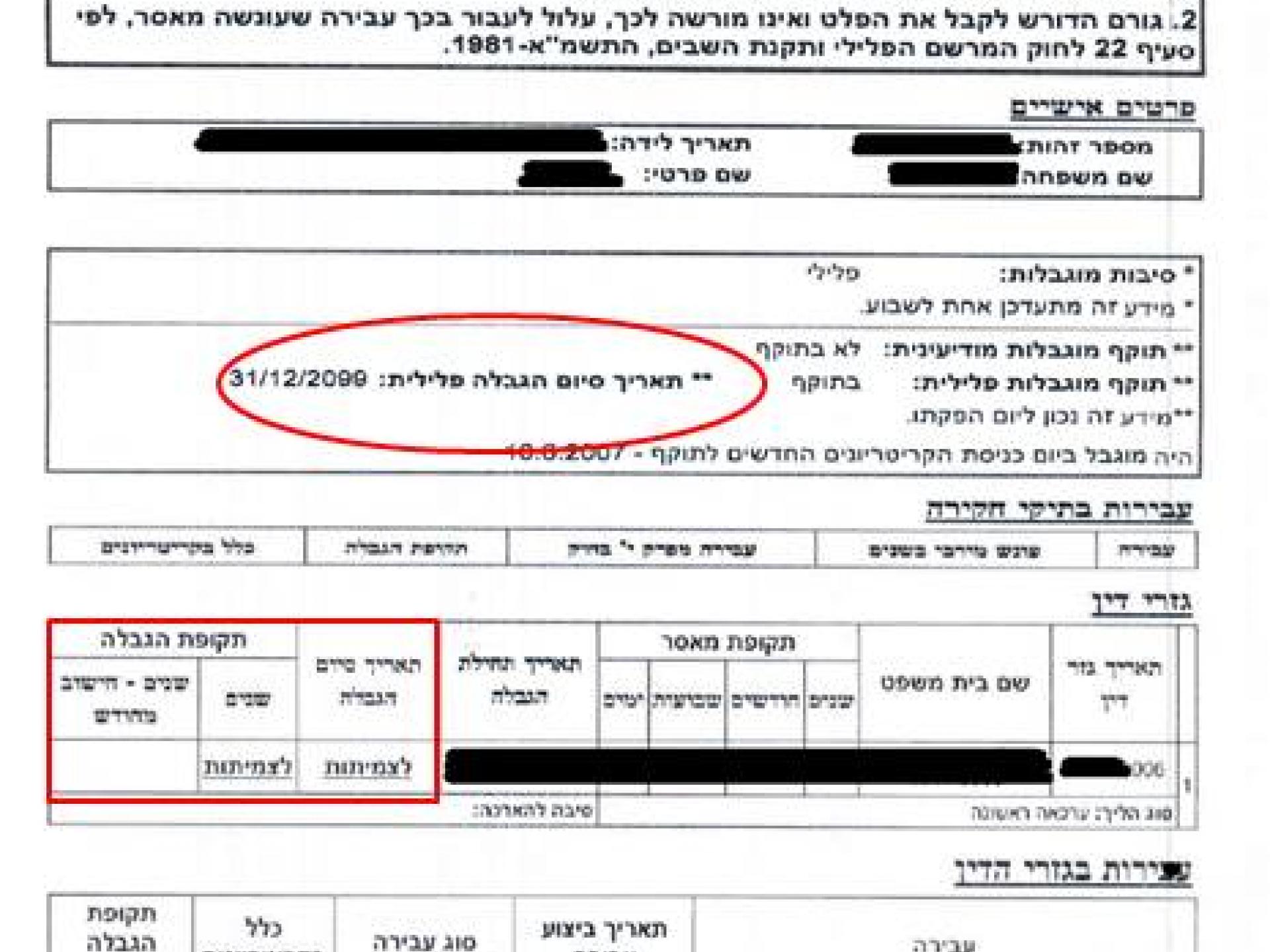 Blacklisting form for a man who committed a crime as a teen and is now blacklisted for eternity, or at least till 2099
Photo:
Goni Tzur

The Police blacklist includes Palestinians who were caught entering Israel in the search of employment without a permit. The list is a long one and the possibility of appealing is farcical as nearly 100% of those who appeal are denied.

Shabak blacklists includes the names of hundreds of thousands of Palestinians.  Having your name on this list prevents you from obtaining permits into Israel based on supposed security grounds which are mostly arbitrary.  These denials are issued without any explanations or clarifications to the individual who is thus unable to work, study, obtain medical treatment or travel widely. The cruelest ramification of being blacklisted by the Shabak is a denial of livelihood.  Entire families and many villages are therefore doomed to a life of poverty and hardship, a life of idleness and unmet basic needs which ultimately enable the Occupation to continue and control the population.  The Civil Administration officers and commanders are not always familiar with the hundreds of rules and their severe ramifications for the population under their rule.

Members of Machsomwatch, led by Sylvia Piterman, have become experts who specialize in these rules and focus on helping blacklisted Palestinians with the complex Civil Administration application process.  The team follows applications submitted by Palestinians and if the Palestinian chooses, an appeal is submitted to the Court of Administrative Matters through Attorney Tamir Blank. The team’s success rate in removing such preventions through the appeal process is about 70%!

Civil Administration Operations Branch of the Ministry of Defense blacklists Palestinians who have not paid various debts (such as traffic fines).  Often the reason that these fines have not been paid is due to the fact that the individuals never learn that they have been fined (mail service is nonexistent in Palestinian towns and villages).  Another cause for unpaid debts is that Palestinians are prohibited from entering the area where the fine is to be paid.  For example, these fines are issued to those who commit simple administrative violations – such as working as a laborer while holding a tradesman’s permit, or vice versa. In many cases the grounds for being blacklisted are not clear.

Collective blacklisting resulting from the Lone Terrorist Intifada – For the past two years and especially in 2018, after every individual attack, restrictions of movement and work have been enforced upon all persons bearing the same family name as the attacker. Often hundreds or thousands of families who live in the same village or town carry the same family name without actually being related to or acquainted with the attacker.   Residents of the town of Yatta had unique family names until the 1967 occupation when the Israeli authorities registered everyone in the census by the name of the town elder – Abu Aram. Thousands of people in Yatta instantly became named Abu Aram and all have now been affected by this collective punishment. The measure penalizes and imposes economic ruin on entire towns and thousands of individuals.

This sanction was initially called a Civil Administration Sanction, because this evoked a negative connotation of a punitive measure, the authorities soon changed the name to Civil Administrative Deterrence.  The label was changed, the circumstances did not.

These are some of the surreal sanctions:

This measure is collective punishment meted out without rhyme or reason.  Thus, in one fell swoop, people who had labored for years building Israeli homes, working our fields, factories and shops, found themselves denied the ability to work and earn a living.

The MachsomWatch team dealing with the Bureaucracy of the Occupation presented class action petitions representing approximately 100 individuals.  As a result of MachsomWatch’s petitions and those of other organizations, the government’s legal adviser declared that the measure was illegal and the deterrence for those who participated in petitioning the government was lifted. Even the State Attorney’s Office could not explain this callous and arbitrary action.

However, the deterrence was lifted only for those who had petitioned, innumerable individuals remain blacklisted.